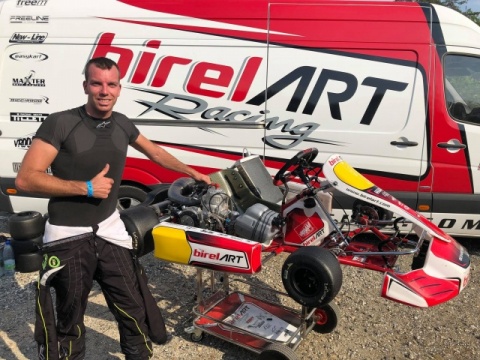 The Belgian, registered with the Austrian division of Birel ART, the KSW of Friedrich Samhaber, will have the official support of Birel ART and the TM Racing engines by Franco Drudi. Let's try to rebuild the dynamics that led to the surprising return of the cannibal to the track.

Time was short and the decision had to be taken quickly: why Thonon tested the "S9" chassis on the Genk circuit on July 19. Struck by the competitiveness of the TM-powered Birel ART by Samhaber, he decided to accept the challenge of the CIK World race. To best prepare, the parties opted for the "test-race" on DKM's Belgian soil, scheduled for 26 August.

But how, after an absence from CIK FIA races lasting two years, did this take place at all? We asked the Cannibal himself.

«2 years ago, after 25 years of competitions, I decided to take a break because I had had enough of racing. This year, however, things have changed and to convince me that it was appropriate to return to the international scene was the double victory in the Nacional Formula Karts in Mexico where very strong drivers from Europe had also participated. So I got in touch with Birel ART and Friedrich, who did everything to get me the chassis in time to do a test and then to decide what to do. After yesterday's test I decided: it's time to come back. For now we will face the DKM race as a test and the CIK World, but I don't want to create expectations on the post-World. Meanwhile, I'd like to take the opportunity to thank Ronni Sala, Friedrich Samhaber and Franco Drudi».

With Jonathan Thonon and Marijn Kremers, Birel ART may truly be a "Red Army" in KZ.