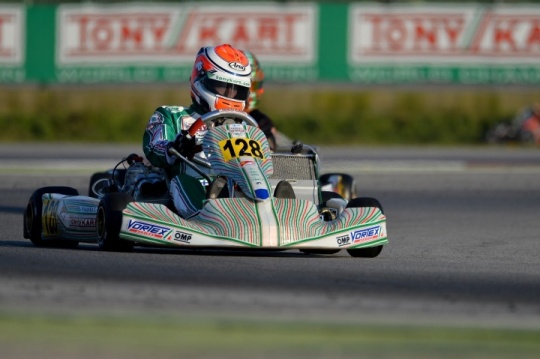 Press Release by: OTK Kart Group
In OKJ class we will see Sebastian Montoya at his debut with our Racing Team...
In OKJ class we will see Sebastian Montoya at his debut with our Racing Team, while in KZ2 we will have an important guest from the single-seater scenario.
The Tony Kart Racing Team gets back to the track, in what can be called its “home circuit”, the South Garda Karting of Lonato. In the long weekend from 15 to 18 February, in fact, the 23rd Winter Cup edition will take place, the traditional race of the international competition calendar.
More than 300 drivers from all over the world at the starting grid. Our Racing Team will not attend the race with the drivers of the Mini category, which will be on track on the occasion of the 2nd round of the WSK Super Master Series.
However, many will be the surprises in KZ2. In fact, in addition to our two official drivers Matteo Viganò and Simo Puhakka, there will also be a talent from the Ferrari Driver Academy: Antonio Fuoco. The Italian driver, engaged in last F2 season, will make a leap back in his recent competitive past, fighting in a very competitive category that counts not less than 100 entries.
In OK class Noah Milell and David Vidales are ready to fight for the victory. In the OKJ category, on the other hand, Josep Maria Martì andLaurens Van Hoepen, joined by Sebastian Montoya, at their debut with our colors.
The event will be entirely available in live timing, while the Sunday finals will be also visible in streaming TV at www.southgardakarting.it
Timetable:
Days before the event: Free Practice from 8:30am
February, Thursday 15th: Free Practice, Sporting and Technical Checks, Briefing
February, Friday 16th: Warm-up; Timing Practice, Qualifying Heats
February, Saturday 17th: Warm-up; Qualifying Heats
February, Sunday 18th: Warm-up; Qualifying Heats; Super Heats; Finals