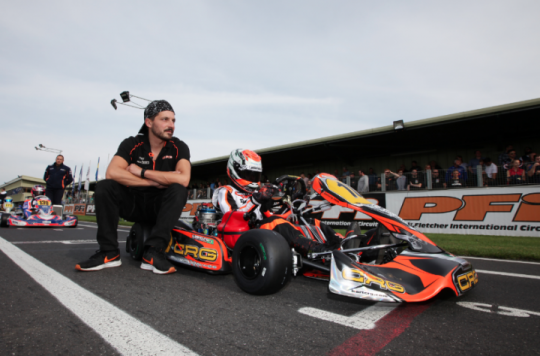 Press Release by: CRG Racing Team
Things could go a lot better for CRG colors at the OK and OK-Junior World Championship in England. The German Hannes Janker has been the best of CRG drivers in OK, the Brazilian Gabriel Bortoleto alike in OK-Junior. The World titles went to the British drivers Keirle (OK) and Patterson (OK-Junior).
CRG expectations were definitely higher than what achieved in the Finals at the OK and OK-Junior World Championship held at the PF International Circuit in Brandon (UK).

Everything seemed to be in place after qualifying that kicked off the British weekend with very encouraging performances, but heats on Saturday and Sunday morning ahead of the Finals clipped CRG drivers’ wings with incidents and unfortunate episodes.

CAMPONESCHI STOPPED BY AN INJURY AHEAD OF THE FINAL

Two of the main protagonists of OK could not make it to the start of the Final of the highest category on track: Flavio Camponeschi was stopped by an injury to his ribs in the closing heat on Sunday morning, after putting in several good performances, while Dennis Hauger’s end result was hampered by a bad qualifying time that made his recovery difficult. The Norwegian driver closed heats in 43rd place in what was a sad goodbye to international karting, since Hauger will switch to motorsport next year with the Red Bull Junior Team in the British F4. Hauger will contest another race with CRG in this season though, as he will be at the start of the Endurance karting 24 Hours of Le Mans next October 1st.

HANNES JANKER THE BEST OF CRG DRIVERS IN OK

CRG flag has been raised high mainly by the German Hannes Janker, who was seventh absolute, and the two British drivers Louie Westover and Callum Bradshaw, that were respectively ninth and eleventh. Bradshaw unfortunately could not get the most of the quickest time posted in qualifying. In the Final Janker climbed eight positions in the classification, as did Westover, while Bradshaw recovered nine places instead.

A good race was also run by Michael Rosina, who found his place among the finalists and crossed the line in 24th position from the 35th on the starting grid. The German of CRG TB Racing Luca Maish had to retire early from the Final.

The victory of the OK World Championship at PFI went to the British driver Danny Keirle, on Zanardi-Iame, a chassis made by CRG.

GABRIEL BORTOLETO MISSING OUT ON THE PODIUM IN OK-JUNIOR

Hopes for a good result in OK-Junior were on CRG’s young Brazilian Gabriel Bortoleto. He was in fact seventh absolute in qualifying and sixth after heats. In the Final, Bortoleto slided in the front runners, raising up to P4, eying the podium. Towards the end of the race he unfortunately lost sight of the pace setters and crossed the finish line in seventh place. A good result was also obtained by Donar Munding who was 14th in the Final, and Ayrton Fontecha Martinez, who recovered up to P16 from the 32nd place on the grid. Among the drivers that could not qualify for the Final, the Finn Rasmus Joutsimies, Kas Haverkort of CRG Keijzer Racing, Hugo Sasse of CRG TB Racing Team and Javier Sagrera were very close to being among the finalists.

The victory of the OK-Junior World Championship went to another young British driver, Dexter Patterson.

CRG’s haul after the closing CIK-FIA 2017 race run at PF International comprises the two triumphs scored by Paolo De Conto on CRG-Tm at the KZ World Championship and KZ European Championship, and the title of Vice-Champion in the International KZ2 Super Cup taken by the Swede Benjamin Tornqvist Persson of CRG Holland.