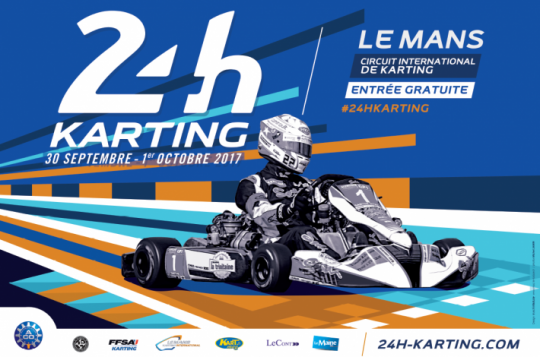 Press Release by: FIA Karting
The first edition of the CIK-FIA Endurance Championship was a great success last year when the new OK engines were introduced.
The Automobile Club de l'Ouest will once again host this exceptional Competition from 28th September to 1st October 2017 as part of the 24 Hours Karting Le Mans. The stronger involvement from several factories and the higher than ever before ambitions of the challengers suggest an intense Competition full of twists and turns during the two times round the clock during this unmissable karting endurance meeting.

Kees Van De Grint, the Vice-President of the CIK-FIA, is a strong supporter of this legendary event:

"After the success of the 1st edition of the CIK-FIA Endurance Championship, I am both proud and eager to give the start of the 2017 24 Hours Karting as the official starter. I expect the race to be even more exciting this year. The commitment of several factory teams from major manufacturers is a real satisfaction and I hope that more and more will dare to take up this challenge in the future. After the KZ, OK and OK-Junior World Championships, the CIK-FIA Endurance Championship is for me the third biggest event of the international season."

Eleven GP1 karts will be measured on the 1384 m of the Le Mans Karting International circuit. Lightweight and powerful, these machines are powered by latest generation of OK engines that have already proved their reliability last year. Internationally renowned champions and specialists in the discipline will compete with different strengths, but the same desire to win. It should not be forgotten that a victory in the CIK-FIA Endurance Championship during the 24 Hours Karting at Le Mans offers first-rate media and commercial opportunities.

Two significant engine manufacturers are pitting their reputations in this formidable competition by directly powering two of the favourites, TM Racing with the No. 1 Sodikart and IAME with the No. 6 CRG Spa. The lessons that such manufacturers can derive from this experience can sometimes be found in the whole of their product line.

The competition between the three factory teams is at the forefront of the sporting news of this 32nd edition of the 24 Hours Karting of Le Mans. France will be represented by the No. 1 Sodikart (Sodi / TM Racing / LeCont) with Anthony Abbasse (FRA), 2017 KZ Vice-World Champion, Bas Lammers (NLD), triple European Champion, Alex Irlando (ITA), the recent winner of the CIK-FIA International Super Cup for KZ2 and Jake French (USA), an excellent American Driver. Team Sodi will be able to count on the experience of several members of the former Sarthe RTKF team, victorious in 2016 after an incredible series of eight consecutive successes in Le Mans.

No. 6 CRG Spa (CRG / Parilla / LeCont) is based on a team of very fast Drivers combining youth and experience with Paolo De Conto (ITA), double World Champion in KZ, Flavio Camponeschi (ITA), the 2012 KF1 World Champion, and two promising talents, Dennis Hauger (NOR) and Callum Bradshaw (GBR). Having learned from their first experience, the CRG team will arrive with bigger goals this year. Energy Corse, the third officially recognised brand, is no novice in endurance as it has already been involved in previous editions and finished 4th in 2016. The No. 40 Energy Corse - (Energy / Parilla / LeCont) will line up two European champions, Tony Lavanant (FRA) and Joel Johansson (SWE) alongside Martijn Van Leeuwen (NLD) and Marco Signoretti (CAN).

Faced with these official teams, the opposition will not be devoid of strength or ambition. The specialists in the French Endurance Championship intend to take advantage of their experience to fight for the victory. The crew of No. 55 Rouen GSK1 (Sodi / Vortex / LeCont) managed by Nicolas Scelles, did not hide their quest for revenge after 3rd place in 2016. Jean-Philippe Guignet (FRA), Maxime Bidard (FRA), William Godefroid BEL) and Gautier Becq (FRA) possess the qualities required to achieve their goal. There is no shortage of advantages for No. 24 Center Wintec (Tony Kart / Vortex / LeCont) with Wilfried Lecarpentier (FRA), Bastien Leguay (FRA), Victor Compère (FRA) and Ulysse De Pauw (BEL). Under the impetus of Jacky Foulatier, team No. 50 La Manche Kartmag (Tony Kart / Vortex / LeCont) gathers the youngest Drivers in the field with an average age of 15 years! Franck Chappard (FRA), Reshad De Gerus (FRA) and Thomas Mialane (FRA) will most likely not be among the slowest.

The Competition will start on Thursday 28th September at 16:00, with unofficial Free Practice, before the Official Free Practice on Friday 29th September from 13:50 to 14:20. Qualifying Practice will take place in four 10-minute sessions starting at 15:25: Q4, Q3, Q2 and Q1, to determine the starting order of the Race. After a 30-minute warm-up on Saturday 30th September in the morning, and a long presentation of the teams in the tradition of the 24 Hours, the grid will start to form at 14:00 for a start traditionally given at 15:00.