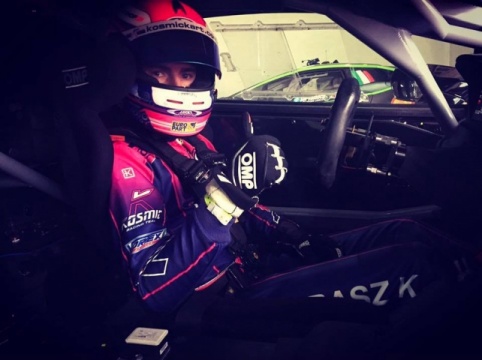 Author: Vroomkart International
The Kosmic Kart driver will be back in Lamborghini Huracan for the Italian GT Championship.
written by Alessandro Roca.

2015 CIK-FIA World Champion Karol Basz has always been attracted by the Lamborghini and he finally realized his dream: he will race the Italian GT Championship with an Antonelli Motorsport's Lamborghini Huracan Super GT Cup.

For Karol it will be a complete debut as he will have to familiarize himself with both the supercar from Sant’Agata Bolognese and the six circuits on the calendar. After the first race at Imola the season will proceed to Misano (June 2-4), Monza (June 16-18), Mugello (July 14-16), Imola (8-10 September) and Mugello (October 6-8). Due to a clash of dates with the Ok world championship in England Karol will miss the second last race at the Vallelunga track.

“I can only say I am satisfied with having reached this agreement with the Antonelli Motorsport team. It will be a completely new experience for me and I have a lot to learn in a very short time. At Imola i managed to run many kilometres always lowering my times, especially on the final day and I must thank all the members of the team. The Lamborghini is a surprising car.” commented an enthusiastic Karol Basz.

“We are truly happy at having reached this objective and to be present for the Italian GT Championship with Karol who naturally will continue the entire programme in the karting world with the Kosmic Racing. It will be a completely new experience for him coming for the kart and having to get to know the team, the car and the circuits. In the two days of testing however he showed his talent and above all his versatility. He only needed a few kilometres to adapt to the driving style needed for the Lamborghini giving excellent results in his times.” was the analysis of managers Alberto Tonti and Giovanni Minardi.