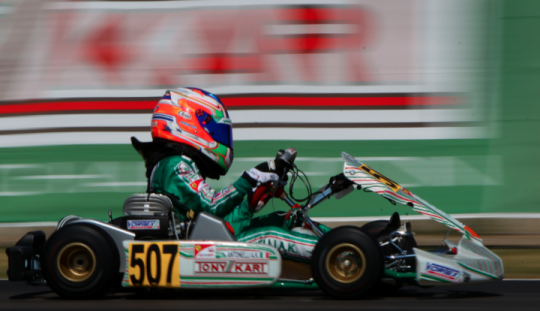 The upcoming commitment on the 1,547 meters of Naples International Circuit’s track will see us fighting among the protagonists, in fact Clément Novalak, Andrea Antonelli and Marco Ardigò have good chances to battle until the end for the 2017 WSK Super Master Series’ title in their respective categories.

In OK class Clément has just obtained two sharp victories, at the 7 Laghi circuit and La Conca, and comes to the final round with not less than a gap of 72 scores on the second.

The quality of our technical material and the excellent work done by the Racing Team staff are furthermore confirmed by the presence of David Vidales in the third place of the standings.

Third placement, but only fourteen points from the first, is Andrea Antonelli in the Mini class. Our driver will play for the title, as always, by taking advantage of his formidable Neos chassis powered by Vortex engine.

In the shifter category, KZ2, we are a little detached from the top positions with Marco Ardigò, but despite this we have good expectations to make a winning performance.

The score that will be assigned on the occasion of the round at the circuit of Naples, as required by Super Master Regulations, is higher than all the other rounds, thus leaving open the chance of a good comeback.

In OKJ class Viktor Gustavsson will also run to improve in the view of the forthcoming CIK-FIA European Championship round, which our driver will be engaged in. Although our driver is not listed in the summit of the cadet class, the leader, Andrea Rosso, drives a Tony Kart-Vortex chassis (Baby Race Team), confirming the value of the material produced in our factory.

As in all other appointments all phases can be followed in the live timing and the final day will be available on the streaming TV of the official WSK website.

Entry list of the WSK Super Master 4th round