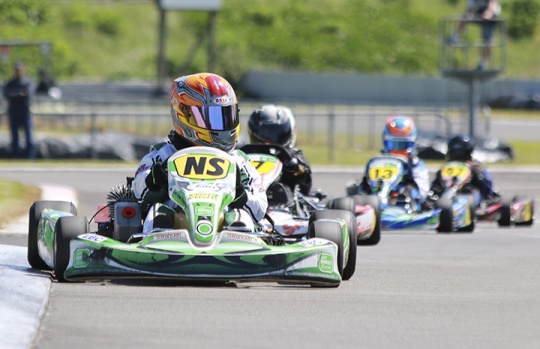 In the class with the most entries (20), however, Boniface was one of four heat winners and ended up third in the class Grand Prix behind day runner-up Liam Sceats and recently crowned South Island class champion Zac Christensen.

Christensen won two of the five heats but a more consistent run (finishing no lower than sixth compared with an 18th for Christensen) saw Boniface claim the round win from Liam Sceats and Mason Potter from Auckland, and Asten Addy from Hamilton.

The meeting attracted 60+ entries from across the North Island and as far south as Christchurch. The big news in the Open class was the winning return of Andrew Hoare, who won the round from New Plymouth's Brendon Jury and Rangiora's Chris Cox, and the Open Grand Prix race from Clint Beaumont from Palmerston North, Cox and Brendon Jury.

There was a surprise, meanwhile, in 125cc Rotax Max Light, with Christchurch's kart-turned-stock-car star Scott Manson staging a winning return to his roots to claim round honours from locals Logan Boyde and Campbell Jamieson.

Both he and Rooney claimed two heat wins apiece and both ended up with the same score, the final result having to go to countback with Wood getting the nod from Rooney, Exton and second-generation Hawke's Bay racers Zac Stichbury and Ronan Murphy, a result which was mirrored in the class Grand Prix race.

How close it was between Wood and Rooney - the latter in his debut drive in the Rotax Junior class - can be seen in the numbers. Rooney twice broke the class lap record during the day and scored the same number of wins, seconds and thirds as eventual winner Wood.

Even on the final countback there was only one placing in it, Wood with a fourth, Rooney a fifth.

Finally, taking up where he left off at the end of the 2015/16 Bayleys WPKA Goldstar Series was young Christchurch driver Louis Sharp who claimed class and Grand Prix honours in the Cadet ROK class.

After a break through the high summer the 2016/17 Manawatu & TRC Toyota WPKA Goldstar Series will resume at the KartSport Wellington club's George Refrigeration & Air Conditioning Raceway at Kaitoke on Sunday March 05.