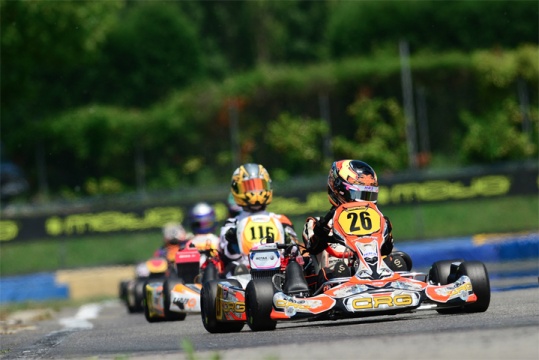 Press Release by: CRG Racing Team
The first round of the Euro Series X30 took place in Castelletto and CRG has been protagonist of the event with the young Spanish driver Kilian Meyer, who secured a great second place in the Final.
The Circuit 7 Laghi of Castelletto (Italy) has staged another international event only one week after the Euro Rotax: the first round of the X30 Euro Series 2016, race also organized by RGMMC Group. The young Spanish driver of CRG’s team led by Martin Reuvers has been protagonist of X30 Junior.

Following the tenth place obtained by Kilian Meyer in the past race of the Euro Rotax Challenge on CRG-Rotax, the Spaniard has put in another great race in Castelletto showing a crescendo of results in X30 Junior on CRG-Iame. He eventually claimed a great absolute P2 in the Final.

The weekend of started with Meyer posting the sixth fastest time in qualifying, position that was later on confirmed after the three qualifying heats. In Prefinal Meyer managed to recover well from a poor start where he lost some positions, and then secured the fourth place at the sprint to the line thanks to several very quick laps. In the Final he was fifth at the end of the first lap, but then recouped well up to P3 and at half way through he managed to install himself in second place, keeping constantly the slipstream of the British winner Lulham.

Thanks to the fourth place obtained in the Prefinal and the second place in the Final, Kilian Meyer is third in the classification of the Euro Series X30, only two points shy of the leader.

The second and final round of the Euro Series X30 is scheduled for next July 17th in Spain at the International Circuit of Zuera. All results are available at www.x30euro.com