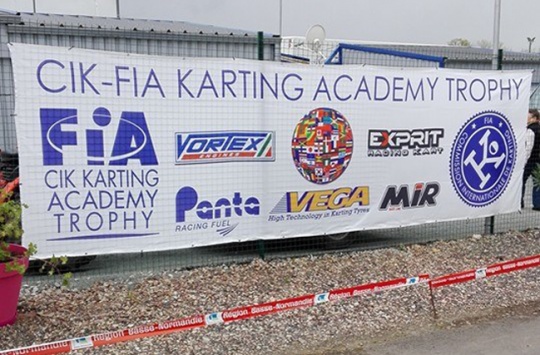 The second session of free practice is the one who has fastest times, and it preannounces a very tight battle. Flavio Camponeschi (CRG-Parilla-Vega) is the fastest thanks to the time of 47.789 seconds set during the second session. Camponeschi gets the better of Lorenzo Camplese (Parolin-TM-Vega), who has the second fastest time: the Parolin Racing ensign is slower than the leader of only 0.008 second. Ben Hanley (Croc Promotions-TM-Vega) rounds out the top three, being slower of 0.029 second.

In the KZ2 Alessandro Irlando (Energy Corse-TM-Vega) sets the fastest time during the third session of free practice. The Italian driver stops the chrono on 47.859 seconds. Thanks to the better climatic conditions and the improved conditions of the track, the third session is the perfect stage also for the second fastest time of the day: 47.973 seconds set by Paolo Besancenez (Tony Kart-Vortex-Vega). Leonardo Lorandi (Tony Kart-Vortex-Vega) is able to exploit the fourth session, before a heavy rain shower, setting a time of 48.013 seconds.

Also for Academy drivers the third session is the fastest in terms of conditions of both track and weather. Polish driver Piotr Wisnicki sets the fastest time of 49.957 seconds, being faster than Callum Bradshaw of 0.129 seconds. Third fastest time for local driver Thomas Imbourg, who has a best lap of 50.179 seconds.