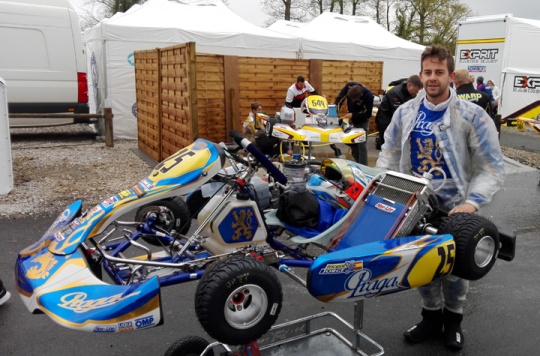 Pole position for Josè Carlos Pescador (Praga-Parilla-Vega) who sets a best lap of 53.303 seconds, faster than Kristijian Habulin (TB Kart-TM-Vega) for slightly less than two tenths of second. Paolo De Conto (CRG-Maxter-Vega) is third with a gap of 0.884 second.

Poleman Pescador seems in perfect shape after winning the two qualification heats of the day. The Spanish driver wins the first qualification round, getting away since the green flag. Behind his shoulders there is Marco Ardigò, who is started from the tenth place. The Tony Kart ensign gets the better of Paolo De Conto, who has been second for the first half of the race. In the second round Jeremy Iglesias (Sodi Kart-TM-Vega) is the runner-up, while Paolo De Conto is third.

“After a tough year we have improved almost everything, but we worked a lot on engine performance. – says Pescador – Winning the first two rounds of the European championship is a huge satisfaction for me and for the whole team. We are a little bit worried for tyres, because they wear out easily. For tomorrow the target is winning, as usual! We will do our best, that is for sure.”

The Baby Race driver tops also the qualifying session improving his fastest lap to 56.773 seconds. In this session the runner-up is Dylan Davies (CRG-TM-Vega), second with only 0.016 second of gap. Stan Pex (CRG-Vortex-Vega), completes the top three with 0.028 second of gap from the leader.

The Dutch driver is the fastest throughout qualification heats, winning all the three rounds. Tomorrow alongside with the poleman there will be Leonardo Lorandi, who scores a victory and two podiums. Third position for local driver Paolo Besancenez (Tony Kart-Vortex-Vega), thanks to two second places and a third position.

Belgian Xavier Handsaeme sets a time of 59.659 seconds, being the fastest in the warm-up session. Second spot for Frenchman Thomas Mialane with 0.090 second of gap, followed by Senna van Walstijn who rounds out the top three.

In qualifying session the climatic conditions improved, and Thomas Mialane sets the pole position thanks to a best lap of 58.000 seconds, followed by Kas Haverkort and Mads Eielso Hansen, both with a gap of less than two hundredths of second.

An accident in the first manche involved nine drivers, forcing the polesitter Thomas Mialane to slow down the pace. After the yellow flags, Callum Bradshaw is able to exploit the re-start after gaining the lead position. The Brit replies also in the second manche, gaining the pole position for the prefinal race. Alfred Nilsson with a victory and a third place has to settle for runner-up position, while the Frenchman Thomas Mialane is third.