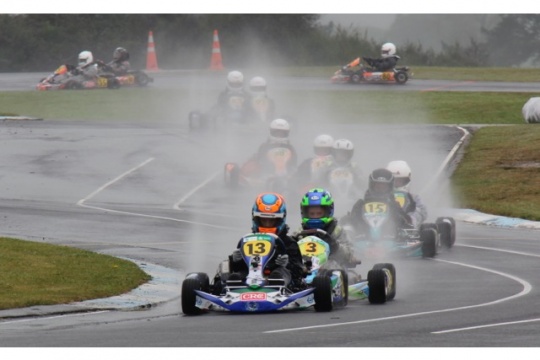 Press Release by: KartSport New Zealand
Undeterred by cool, damp weather and changeable track conditions Vortex category karters Clay Osborne (Vortex Mini ROK) and Liam Sceats (Cadet ROK) raced their way to class victories at the opening round of this year's CRC Speedshow-sponsored Top Half Series at the KartSport Tokoroa club's Holsters Trade Zone Raceway at Tokoroa on Sunday.
Osborne's win came against the biggest class field at the meeting and came thanks to two heat wins, a third and two fifths. Fellow Hamiltonian Connor Davison won two of the other heats but ended up second overall for the round five points back with Josh Richmond third and Blake Austin fourth.

The battle for top spot in the Cadet ROK class was between two young Auckland drivers, Liam Sceats and Kaden Probst. Sceats won three heats and finished third in the two others for the round win but Probst ended up only five points back in second with three second placings and a fifth and sixth, with the consistent Ryan Bell just three points back for third overall.

As far as close finishes go, the closest came in the 125cc Rotax Max Light class where Corey Green from Tauranga beat fellow teen Caleb Huston from Rotorua to the round win by one point! Green won three of the heats but Huston's consistency (three seconds, a third and a fourth) saw him claim second place from Elliott Malcolm and Taylor Harte.

The opening round of the series also saw the introduction of a Dash for Cash GP race at each round with a reverse grid starting format based on results from the five class heats and $500 cash for the winner. The first Junior one was won by Cullern Thorby from Ashton Grant and Joseph Terry.

This year's CRC Speedshow Top Half series has a prize pool including a minimum of $8,000 in prize money, $6,000 in CRC product giveaways, four sets of MG tyres and a custom-painted Arai SK-6 helmet complete with helmet bag courtesy Arai NZ, Headcase Designs and Lightning Racegear valued at $2000.

The four-round series kicked off at Tokoroa on Sunday and heads to the Bay of Plenty in May, and Auckland in June (Mt Wellington club) and July (Auckland club).

CRC Speedshow is New Zealand's premier automotive and motorsport expo and this year will be held at Auckland's ASB Showgrounds over the July 16-17 weekend.

More information on this year's CRC Speedshow Top Half series can be found on KartSport New Zealand's website
http://www.kartsport.org.nz/events/2016-top-half-series and Facebook page https://www.facebook.com/TopHalfSeries/