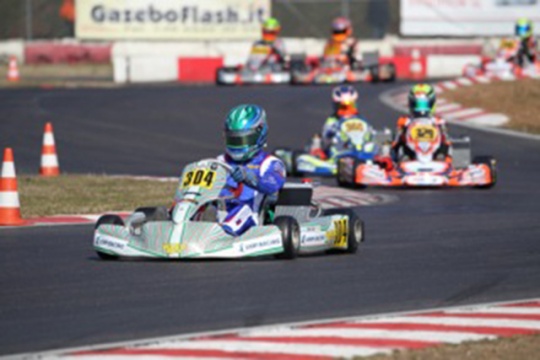 Once again a good entry list will enliven this race that is one of the most important races on the international scene. Organized as usual by Parma Karting and present in the CIK-FIA calendar, the race will feature four categories on track: alongside KZ2, the new OK and OK Junior and the smallest category 60 Mini will all run on Vega tyres.
A total of 22 represented countries are already present in the still provisional entry list of the 27th Andrea Margutti Trophy. Among the foreign countries, Denmark will have the highest number of entrants: 17. The most represented team is Ward Racing that will field 18 drivers.
Among the most prestigious teams of KZ2, Maranello Kart will line up Massimo Dante and Tommaso Mosca, RB Racing will make Mirko Torsellini debut with the team's colors, Formula K will field the strong pairing made by Francesco Celenta and by the American Gary Carlton, KSM Schumacher Racing the very quick Alexander Schmitz, who has been one of the strong protagonists of the past edition, Baby Race will take on track the stronger and stronger Leonardo Lorandi, while Ghidella Racing will field Loris Spinelli. A lot of other interesting names will also be present as Luca Tilloca with GP Racing, Giacomo Pollini on CRG by Renda Motorsport, Alberto Cavalieri who will debut on Maranello-Modena and Danilo Albanese, at the debut in KZ2 with MT Motorsport.
A strong performance is expected by the Russian Alexander Smolyar and by Simon Ohlin of Ward Racing, as well as by Riccardo Cinti in the new OK category, while a lot of victory contenders will challenge each other in OK Junior, among which some drivers at the debut in the category like Mattia Michelotto. Among the most interesting new names, the Russian Ivan Shvetsov of Ward Racing has been on the podium at the recent Winter Cup, and the Dane Noah Watt of Baby Race.
Category 60 Mini will be particularly crowded and will see several early season protagonists on track. Team Gamoto will field a good lineup made by eight drivers, among which some very strong racers like Dan Skocdopole, Adam Putera and Riccardo Camplese. Team Giugliano Kart will also line up eight drivers including the recent Winter Cup winner Francesco Pizzi, while other protagonists will be competing among the ranks of Team Evokart like Leonardo Caglioni or Team Morsicani like Federico Cecchi.
The provisional programme of the 27th Andrea Margutti Trophy follows (CET):
Thursday 10 March: Free practice from 8:00hrs to 12:35hrs and from 13:00hrs to 17:35hrs.
Friday 11 March: Free practice from 8:00hrs to 12:35hrs and from 13:00hrs to 17:35hrs. Sporting scrutineering at 11:00hrs (KZ2); at 12:30hrs (60 Mini); at 14:00hrs (OKJ) and at 15:30hrs (OK).
Drivers Briefing at 16:30hrs (KZ2); at 17:10hrs (60 Mini); at 17:50hrs (OKJ) and at 18:30hrs (OK).
Saturday 12 March: Official practice from 8:30hrs to 10:10hrs. Qualifying from 10:00hrs. Heats from 13:20hrs.
Sunday 13 March: Warm Up from 8:30hrs. Second chance races at 10:30hrs.
Prefinals: at 11:30hrs (OK), at 13:30hrs 60 (Mini); at 13:50hrs (OKJ); at 14:20 (KZ2).
Finals at 14:50hrs (60 Mini); at 15:20hrs (OKJ); at 15:50hrs (OK); at 16:25hrs (KZ2).
Prize ceremony at 17:30hrs.
Info www.trofeomargutti.com
Parma Karting
Press Office
Parma, 1 March 2016
In the picture: Ivan Shvetsov, Ward Racing, OK Junior.