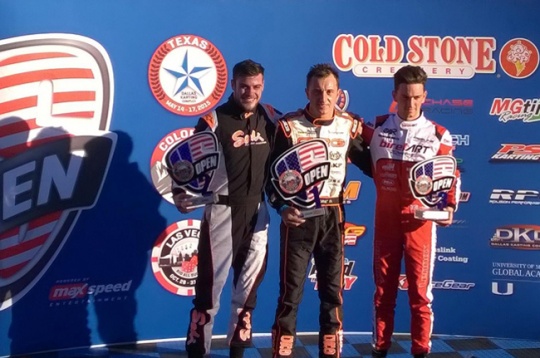 Press Release by: CRG
Davide Forè secured the victory and the title of the US Open Championship's Shifter Senior Elite category in the third and last round of Las Vegas.
... in the same weekend, Team Gamoto had positive results in 60 Mini at the WSK Final Cup of Adria.

Davide Forè has secured another victory in this season end. After winning, for the second time in a row, the Race of Stars in Australia, the CRG driver won the US Open Championship in  Las Vegas.
During the Halloween weekend, the event run on the premises of the Rio All-Suite Hotel and Casino of Las Vegas, Nevada, has seen Davide Forè taking the victory in the Shifter Senior Elite (Honda engine) proceeding Jake French and Jordon Lennox-Lamb at the flag of the Final, a result that earned Forè the US Open title.

US OPEN, DAVIDE FORE’S VICTORY
Forè has been the quickest since qualifying of the third round of the US Open held in Las Vegas, as he posted the pole position in 45.688s leading Jordon Lennox-Lamb (45.775s), Jake French (45.843s), Sabré Cook (45.988s) and Austin Wilkins (46.277s). He kept his momentum winning the four qualifying heats. In the Final, the race was red flagged due to an incident and, at the restart, Forè engaged a good duel with Lennox. Sabré Cook tried to close in on the leading duo but Forè got the most of the melee and gained some further advantage winning by a good margin on his rivals.

GAMOTO AT WSK FINAL CUP
The last round of the WSK season, the Final Cup held in Adria, has seen Gamoto Racing Team competing in 60 Mini. The Briton Luca Griggs (absolute third in qualifying) and the Czech Republic Dan Skocdopole have been shining on CRG-Tm and closed respectively in seventh and eighth place of the Final. They put in great results in the qualifying stages. In Prefinal-A Skocdopole was in fact third, while Griggs was sixth as they both win a heat each. Skocdopole was fifth in the general classification while Griggs was 11th.

Alexandre Kattoulas also qualified for the final race and ended 17th at the flag, while Adam Putera closed his effort in P19. Mathias Torreggiani ended 30th instead. The other drivers on CRG, Cenyu Han, Victor Majgaard, Nik Zamir, Nikhil Bohra and Egor Litvinenko, could not qualify for the Final.

The Mexican Sebastian Alvarez has also taken part in the WSK Final Cup, in KF Junior, but could not go beyond his Prefinal as he ended 22nd and could not run the Final.