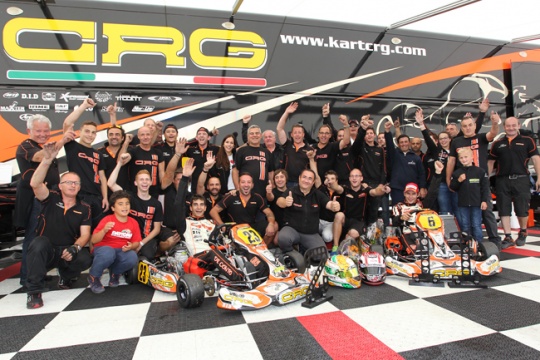 Press Release by: CRG
Jorrit Pex on CRG-Tm got the title of CIK-FIA KZ World Champion proceeding Paolo De Conto in a sprint to the flag.
Pedro Hiltbrand on the podium of KZ2 but excluded at the end of the race due to a verbal reaction to a 5 seconds time penalty he had been handed.
The KZ and KZ2 World Championship in Le Mans has been quite tight until the last lap, thanks to the competitiveness of the drivers on track that was very high in the world CIK-FIA event and to the mixed weather that changed from wet to dry challenging technicians further in finding the right setup of karts, but also due to stewards interventions that enlivened a bit the final classifications.

One thing is certain, the KZ World Champion 2015 is Jorrit Pex, the quick Dutch driver that has recently returned to the “CRG family” together with his team Pex Racing that includes also his brother Stan Pex, who was on track in the International KZ2. The weather also eventually smiled to the event of Le Mans and, following the rain fallen on part of the Saturday's programme and Sunday morning, the most awaited sun came out for the final stages of the KZ and KZ2 championships.

KZ, ONE-TWO FOR CRG WITH JORRIT PEX AND PAOLO DE CONTO
Jorrit Pex, on CRG pushed by TM engine prepared by Jos Verstappen and Franco Drudi, after winning the Prefinal ahead of Paolo De Conto, put in a great race in the Final keeping himself behind the Italian driver of CRG-Maxter first and then moving an irresistible attack at the final lap, inflaming the numerous fans present in Le Mans that lived a very exciting moment.

The fight for the world title has involved Paolo De Conto, who led the race from lap three to the penultimate lap with Jorrit Pex on his tail. Exiting world champion Marco Ardigò was the third contender after a great comeback. The duel that involved De Conto, Pex and also Ardigò at the last lap originated a melee that ended up with the victory going to Pex, while De Conto fought with all his energy Ardigò's attack closing second in Pex's slipstream.

At the end of the race, Ardigò lost the third place due to a 10 seconds time penalty for the dropped nose cone after a contact with Arnaud Kozlinski, who inherited the third place.

Among the other CRG drivers, Andrea Dalè was back into the top ten of KZ on CRG-Tm, in ninth place.  Davide Forè ended 26th due to a contact, while Simo Puhakka had to retire.

GIANCARLO TININI'S TITLE DEDICATION
“I am really happy on the victory obtained by Jorrit Pex – declared CRG Spa President Giancarlo Tinini – also because he came back with us especially for this CIK-FIA World Championship after having already won the KZ1 European Championship in 2012 with out material. Paolo De Conto would have also deserved the win, but in the end we scored a great one two and we are happy for this. I would like to dedicate this CRG win to my mother-in low Rachele who passed away last week. She even had more passion that I do and I emotionally want to dedicate this 12th world championship in CRG's history to her memory.”

THE FINAL SPRINT OF JORRIT PEX
The comment of the new KZ World Champion Jorrit Pex: “ We won a lot a lot in the past: 4 times the German Championship, WSK Championship, Euro Series, the European KZ1 Championship, the Grand Finals Rotax junior, but the world championship was the only thing that was missing and in 2015 we took it so I am really happy with it. For all the race the gap between me and Paolo was the same and a was waiting for a mistake by him, but he would not make it and I was only catching millimeters and centimeters. Then he went again and I closed in again. With six laps to go I said now I have to make a move or he is gone and then I went over the limit and with one lap to go I was very close to Paolo, he felt I was there and he started closing the gaps and we lost a lot of speed and then there was a gap for me to go inside and I took the inside line we nearly stopped. Meanwhile, Marco Ardigò closed in on us. He was on the outside, the next  corner was to the left and I was in a good line for the chicane and out we came and I knew I was first and I knew no-one could take it from me”.

PEDRO HILTBRAND STRIPPED OF THE THIRD PLACE OF KZ2
In KZ2 the Spaniard of CRG, Pedro Hiltbrand tried his best to get the victory in the CIK-FIA International KZ2 Super Cup on CRG-Maxter, but after being the best following qualifying heats and getting the second place in his Prefinal, he lost some ground early on in the Final. Eventually, Hiltbrand successfully put in an overtaking move for the third place, but stewards judged the move to be too aggressive. For this reason, he was first of all handed a 5 seconds time penalty, and then excluded due to a verbal reaction to the penalty. The title went to the French Thomas Laurent.

Among the other CRG drivers of KZ2, Stan Pex (CRG-Tm) ended fifth, Fabian Federer (CRG-Maxter) was eighth after also fighting for the third place. The Dutch Martijn Van Leeuwen of team CRG Keijzer Racing ended 22nd due to a spin after a contact. His team mate Dylan Davies, after the great third place in the Prefinal, had to retire in the Final as did Fabrizio Rosati who had the merit of managing to qualify for the final stages.

Felice Tiene could not take part in the final stages due to the pain to his left hand and back, after the incident he has been involved in during the last heat on Saturday. Tiene tried to run the warm-up on Sunday morning, but could not continue also to avoid compromising his participation to the KF World Championship that will take place next 27 September in Italy at La Conca (Muro Leccese).