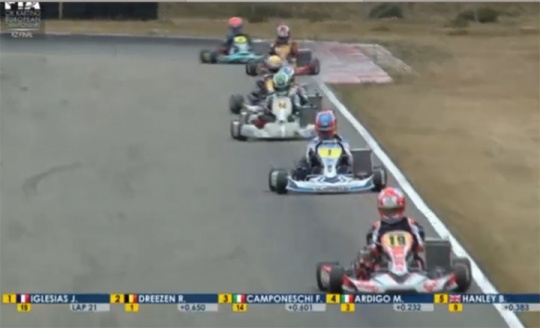 Author: Vroomkart International
Superb win of Iglesias (KZ) and Schmitz (KZ2) in the respective finals.
In KZ, the final sees Jorrit Pex staying keeping the lead after the start, but slightly fading away as the race goes on. Camponeschi and Ardigò fight for the lead, then lose momentum as Iglesias and Dreezen come through the field. Also Hanley is on a charge, he would soon joined the group of chasers comprising Pex, Ardigò and Camponeschi, while Iglesias and Dreezen make a break. Camponeschi would manage to move past Ardigò at half race distance, but nothing changes in the championship after the worst result is dropped.
On the podium the local crowd cheers for his local hero Dreezen, as Iglesias tops the podium flanked by Camponeschi, who celebrates the title.
After the podium ceremony, both Dreezen and Camponeschi would get a 30" penalty for a misplaced front bumper, promoting Ardigò and Hanley to the podium. Nothing changes in the championship standings (see attached)

In KZ2, Stan Pex seems capable of holding off the main rival Schmitz, but he gets past after few laps. The German is not able to pull away, so Pex takes him on the inside for the lead, but with few laps to go he's forced to give in having to settle for 2nd place. Quite comfortable in 3rd, Swedish Energy driver Joel Johansson gets the result he needed to move past Hiltbrand in the championship, hence taking the continental crown.