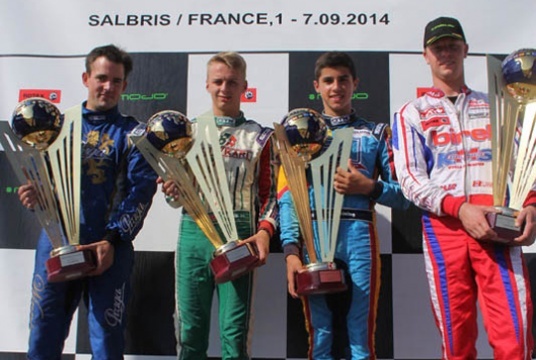 Press Release by: Rotax Euro Challenge
The ROTAX MAX Euro Challenge finished its season 2014. The 1.500 long circuit of Sologne Karting at Salbris was venue of some thrilling competition, which did not only ascertain the race winners but the Euro champions 2014. In the end Thomas Preining (junior), Harry Webb (senior), Ben Cooper (DD2) and Martin Pierce (DD2 Masters) took the overall victories, shining as bright as the sun above France.
In the junior’s prefinal pole setter Thomas Preining (Team TKP) had a walkthrough. He defended his lead and controlled it up to the finish line. Behind the title candidate his teammate and championship rival Richard Verschoor (Team TKP) was in second place for a long time. But finally he had to give way to a fulminant driving Alex Quinn (Coles Racing). Yet Verschoor gained the intermediate championship lead by finishing third. Behind the top three Dave Wooder (Dan Holland Racing) and title contestant Dean MacDonald (Strawberry Racing) completed the ranking. Championship favourite Max Timmermans (Dan Holland Racing) had no luck at all. Starting from first row he dropped back a lot of positions and eventually could make it up to the top ten. That made him lose all chance for the Euro crown.
With some tactical racing Thomas Preining started into the final race. Being a part of the leading group the man from Austria did not take any risks and left way to his teammate Richard Verschoor, knowing that only a really bad result could prevent him from winning the championship. So Preining was satisfied with second position, which made him the new Euro champion. On the other hand Verschoor was happy, too, as he celebrated his first season win, crowning him vice champion 2014. Third place on the podium was reserved for Marcus Armstrong (Dan Holland Racing) ahead of Dean MacDonald in fourth position.
The senior’s prefinal was a clear cut for Harry Webb (Strawberry Racing), who did not leave any doubt and took another start-finish win. Yet Glenn Van Parijs (Bouvin Power) was strong, too. The man from Belgium was the fastest man on track and conquered the second place, thus displacing title candidate Guan Yu Zhou (Strawberry Racing) to third place. Championship leader Edward Brand (Intrepid Driver Program) struggled: In the beginning he was able to establish within the top three but towards the end he lost pace, ending up in eighth place. Even in the final he was unable to keep the pace of the top.
Which did not apply to Harry Webb: In the final race he was a class of his own again. His win was never in danger, which not only granted him the race win but the European crown, although he missed the opening round Genk! Behind the new champion it was Josh Price, Lars Lamborelle and Guan Yu Zhou complementing a quadruple triumph for Strawberry Racing.
With a perfect start into the DD2 prefinal Sean Babington (Strawberry Racing) and Ben Cooper (KMS – Birel Motorsport) headed away from the rest of the grid, while his opponents Jordan Lennox Lamb (CRG SPA) and Anthony Abbasse (Sodikart) struggled hard and dropped back to chanceless positions. So the decision concentrated on the duel between Babington and Cooper, who arranged the win among themselves. When the race approached the end, the fight became tougher and the lead changed several time until Babington had the advantage in the very last lap.
Even in final the duel between the two title contestants continued: But unfortunately it lasted only a few laps when it came to a slight collision between them. Cooper was given a five seconds penalty while Babington had to retire with a gearbox defect only a few metres later. As a result the championship was decided in Cooper’s favour, who finally finished third in the race. Andreas Backman (Strawberry Racing) profited by this incident and celebrated his first season win ahead of Jordan Lennox Lamb (CRG SPA) who had shown a sensational catch-up from the end of the grid. “It is not a great way to win the championship but that’s racing. Now I am really happy”, stated Ben Cooper, who successfully defended his crown.
As for the DD2 Masters Frenchman Guillaume Berteaux (Kartagene) took the prefinal win ahead of Martin Pierce (Praga Racing Team) and Christophe Adams (Sonic Racing Kart). In the final he repeated that success and saw the chequered flag in tenth position of the overall grid. Second place went to Christophe Adams again, while Tamsin Germain (DG Racing) completed the podium. In the championship it was Martin Pierce (Praga Racing Team) taking the overall victory.