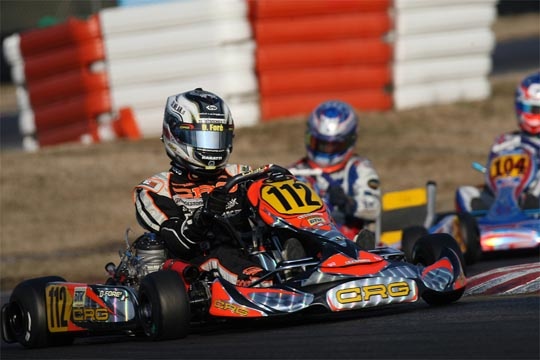 Press Release by: South Garda Karting (Lonato)
In the picture: Davide Forè winner in one of the heats on Friday 15th February at the 18th Winter Cup di Lonato.

Almost 250 Entrants Coming From All Around The World On The Racetrak. In Kz2 First Wins In The Heats For  De Conto, De Brabander And Fore’, In Kf2 Verstappen Wins Two Heats, As Well As Alessio Lorandi In Kf3.

Lonato del Garda (Brescia - Italy). A beautiful, sunny day and the snow fallen at the beginning of the week finally melt down. So, the 18th Winter Cup of Lonato began regularly with qualifying and the first qualifying heats on Friday.

The efforts made to clear the racetracks from the snow in record time to allow all the participants to enjoy ideal racing conditions were finally rewarding: now, the attendance can see the usual race of the beginning of the season in the best condition possible. The race, this year too, has attracted the most important teams and all the top drivers at internationallevel.

With almost 250 entrants coming from all around the world in the three categories - KZ2, KF2 and KF3 - , in the first qualifying sessions and heats there were the first, interesting results on the racetrack, results which confirmed the expectations of the days which preceded the event, with some, pleasant surprise.

KZ2. The best time in the most performing category, the KZ2, was set by the French Arnaud Kozlinski, at his debut on a Birel chassis managed by the AVG team; he preceded his teammate  Paolo De Conto and Davide Forè (CRG-Maxter of the Polish team DTK).

On the other hand, success in the three heats of the day went respectively to Paolo De Conto in the first, to a surprising Yannick De Brabander at his debut with Maranello Kart in the second, while the third heat was won by the three CRG drivers, with  Davide Forè who preceded his teammate Fabian Federer and Andrea Dalè.

KF2. In KF2 the Dutch Max Verstappen (CRG-Tm), among the favourites before the race, missed the best time in qualifying for just a millisecond; so, the fastest driver was the fast Finnish Aatu Moilanen (Kosmic-Vortex). Anyway, in the two heats he took part in, Verstappen managed to redeem himself and won them both. The other three heats of the category were won respectively by Diego Bertonelli (RK-Bmb), Dorian Boccolacci (Energy-Tm) and Moilanen himself who confirmed his first place in the category ranking.

KF3. In the Junior category, the KF3, the English Dan Ticktum (FA Alonso) set the fastest time in qualifying, even though it was the Italian Alessio Lorandi (Tony Kart-Vortex) who prevailed in Friday's heats winning two races, with Ticktum winner in one as well as the Russian Vladimir Atoev (Tony Kart-Vortex) and the Indian Jehan Daruvala (FA Alonso-Vortex), winner of the 2012 Asian Pacific in Macau.

The official programme of Saturday 16th February: after the warm-up from 08.00am, to 09.55am, at 10.00am more group meetings. On Sunday 17th February  the drivers' presentation at 12.15pm and, then, from 01.30pm the Pre-finals and the Finals of the KFJ, KF and KZ2 with prize-giving ceremony after each race.

All the rankings on www.southgardakarting.it