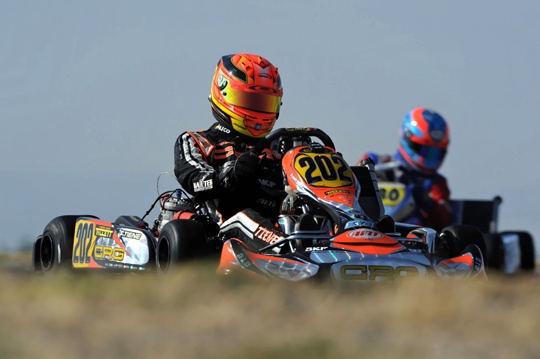 Two world cups (KF2 and KZ2) together with a one-two-three finish, a European Champion crown, three titles in the WSK series, a series of international podiums and dozens of victories in national championships all over the world! Once again, the CRG brand has had a great season in 2012. Beyond this impressive list of successes, CRG has shown again the skills of its racing team, the work made by its wide network of distributors and the company's uncompromising determination to manufacture state-of-the-art karts.
photo KSP
Victories at "Margutti" and at WSK Master Series
The CRG team's season started immediately with a series of victories and titles. At Lonato, in March, Fabian Federer (CRG-Maxter) in KZ2 and Felice Tiene (CRG-BMB) in KF2 added their names to the list of winners of the famous Andrea Margutti Trophy. A week later, Jordon Lennox-Lamb (CRG-Maxter) won the WSK Master Series title in KZ2, while Felice Tiene (CRG-BMB) in KF2 and Jorrit Pex (CRG-TM) in KZ1 both took second place after the three races. Pex even managed the feat to conquer three pole positions! "The beginning of the season quickly reassured us about the potential of our new 2012 chassis as well as the different technical choices made" commented CRG team manager in this important moment of the season.

Palou Successful Again at WSK Euro Series in KF3
CRG drivers continued their harvest of success at the WSK Euro Series. After a third place in the European Championship with a victory, Alex Palou (CRG-BMB) conquered the KF3 title in this hard-fought competition, and Jorrit Pex did the same in KZ1. Pex even achieved a unique feat by winning three out of four races! Second in the general standings, Tiene came again to the fore in KF2, as Lennox-Lamb did in KZ2.

CRG Ever-Present in CIK Championships
In 2012, CRG has definitely been one of the most visible brands on the international scene. Three months after the CRG one-two finish by Jorrit Pex and Davide Forè at the European KZ1 Championship, Lennox-Lamb (CRG-Maxter) won the World Cup for KZ2 at Sarno with a comfortable lead.
The team barely had the time to celebrate this victory; indeed, they experienced an even more exciting success at Zuera (Spain), with CRG one-two-three finish by Felice Tiene, Max Verstappen and Jordon Lennox-Lamb at the World Cup for KF2! A true plebiscite for the Italian company...
This impressive series of successes would have not been complete without an outstanding performance at the World KF1 Championship in Japan and Macao. Felice Tiene (3rd in the general standings) took four podiums, while Davide Forè climbed onto the top step of the podium at Suzuka! This competition also enabled LH chassis (a brand of the CRG Group) to win their first titles thanks to Tom Joyner. At Macao, the British driver won the four races of the meeting by literally dominating the event!

"2012 has been another great year for CRG and we would like to thank all the drivers who wore our colours during the season. We would also like to congratulate KVS engine mechanics on the quality of their work, but we are also proud of our triumph in KZ thanks to Maxter engines coming straight from our Desenzano workshops". Definitely, CRG has been, is and will continue to be a powerful presence on the karting scene...