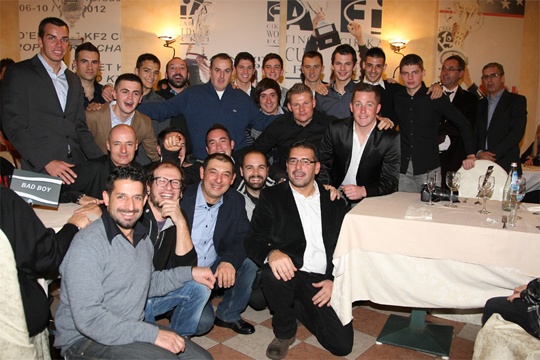 For CRG it was another 'magic' year: CRG showed to be strong from every point of view. It was competitive, reliable and powerful; it was, and it is, a team united and focused on the final goal, whose achievements were simply awesome.

A GOLDEN SEASON. With the usual sober ceremony, in front of 200 guests, CRG celebrated the protagonists of this golden season, the 26th of its history, which made CRG outstanding roll of honour even richer.

Giancarlo Tinini, CRG President: “It is always a pleasure to meet here at the end of the season to celebrate together. It is an important moment that we like to share with all our family, the team members and our retailers, for a toast in merriment. Our strength is our ability to keep our team united. Our basic concept lies in the importance of team building, and if the team works results will come. But we are accustomed to look forward, and from tomorrow onward we will be working for next season; in 2013 season we will take part once again in the most important international competitions."

THE AWARD WINNERS. The prize-giving ceremony was hosted by Yanek Sterzel, brilliant as usual, director of TKart magazine. His cohosts were Vania and Nicole Tinini and CRG sports manager Euan Jeffery, who awarded CRG drivers and retailers.

Among drivers, besides Felice Tiene, Jordon Lennox-Lamb, Jorrit Pex and Alex Palou for theirsuccesses in 2012 season, also Max Verstappen got awarded for being the runner-up of the KF2 World Cup, Tom Joyner for being the runner-up of the KF1 CIK-FIA World Championship, Davide Forè - runner-up in the KZ1 CIK-FIA European Championship -, then all the other official drivers Jonathan Thonon and Fabian Federer (winner in KZ2 of the Andrea Margutti Trophy), besides Andrea Dalè, Daniele Delli Compagni, Laurent Marchandise and Luca Tilloca, who raced on a Kalì-Kart chassis. A special award went to “Giambo” and to the young Jacopo Barbantini for their commitment as amateurs.

BEST DEALER OF THE YEAR 2012. Special awards were given to the CRG retailers who, thanks to their activity, contribute to make CRG commercial success steadier all around the world.

The first prize for the special CRG retailers ranking for Italy went to GALIFFA KART.

Special prizes went to KVS, for their preparation of the KF2 and KF3 BMB engines, and to Filippo Zaggia, KZ Maxter engine preparer.

THE INTERVIEWS.
Felice Tiene (KF1, KF2 and KZ2): “at the beginning of the season I foresaw a good season, and it turned out I was right. We were always very performing thanks to KVS and their KF engine preparation. The CRG chassis worked perfectly, and the technicians work was great. We were always very fast and, besides myself, I'd like to mention the great races of Jordon, Max and Alex in KF3, and also Davide did very well both in KF and KZ. Next year I'm sure we will do even better. For the time being let's keep this beautiful season on file: this year, with the change of the engine in KF, we showed that CRG is second to none!"

Jordon Lennox-Lamb (KZ2, KF1 and KF2): “For me it was a wonderful season. After racing all the year in KZ2, I did well in KF too, both in the KF2 world cup and in the KF1 world championship. I'm so happy for that. Next year I will focus on KZ1, where I will try not to be pushed around by the top drivers of the category. Anyway, I'm happy I can challenge these "legends" of this category.

Jorrit Pex (KZ1 and KZ2): “I'm happy because I won 3 titles on 4: the KZ1 European Championship, the KZ1 WSK Euro Series, and the KZ2 German Championship. At the beginning of the year we knew we would be on top, but not up to these levels. We won many races. The CIK-FIA European title was a beautiful satisfaction, but then winning also the WSK Euro Series was a dream come true. The victory of the German championship was a further confirmation of our competitiveness. I'm really very happy."

Max Verstappen (KF1, KF2 and KZ2): “Since my return to CRG I was already competitive in my first race. Unfortunately I made several mistakes, but you need a little bit of luck to win. In some races I was unlucky. I still don't have a definitive programme for next year, but very likely I'll run in more than one category just like I did this year, including KZ1, and, of course, I'll try to win them all! CRG is a certainty, we can do very well."

Alex Palou (KF3): “I want to say thank you to the whole CRG team for this great season. Next year I'll make my debut in KF2 and it's gonna be hard. But I'm well determined and willing to do my best. In this end of season I raced in Spain in KZ2 and I'm really satisfied because I found myself immediately at my ease. Anyway, I think next year I will focusespecially on KF2."

Tom Joyner (KF2 and KF1): “I had a beautiful season at my first, real international experience as official driver for the LH Racing team. I want to say thank you to CRG, to my team manager Richard Kaell Franchini and to Giancarlo Tinini, besides all the mechanics. My season wasalready very good before we came to Macau for the last round of the KF1 CIK-FIA world championship; then, in the Asian race, we achieved a great result! I'll stay with Tinini Group next year, even though I will race for the Zanardi Team of Dino Chiesa. I'm happy for this choice and I'm looking forward to takingpart in my second international season and keeping on winning. I'm sure that with Dino Chiesa I'll be able to get lot of satisfaction."

Jonathan Thonon (KZ1): “In 2013 too, as scheduled, I'll be racing for CRG and I hope I'll be able to achieve what I didn't achieve this year. CRG is a second family for me: I've been racing on CRG chassis since 2001, when in Paris-Bercy I stepped onto the podium together with SebastianVettel and Nico Hulkenberg. With CRG I've won 4 world titles and 2 EuropeanChampionships, besides three WSK titles and a final in Las Vegas. This year was a bit tougher, but we are already motivated and ready to face next season and to come back to victory."

Davide Forè (KZ1 and KF1): “I'm satisfied for the way the season developed. In the KZ1 European championship in Wackersdorf I stepped onto the podium. I'm disappointed for the KZ1 world cup in Sarno where I missed a good result for a clutch failure. Also in the tworaces of the KF1 world championship I did rather well: I won one of the finals in Suzuka. Anyway, my teammates in KF had an extraordinary season, and CRG was on top in all the categories. All CRG Group showed what it is capable of inevery moment. I'm sure that we will be competitive in all the categories next year too, and ready to win since the beginning."