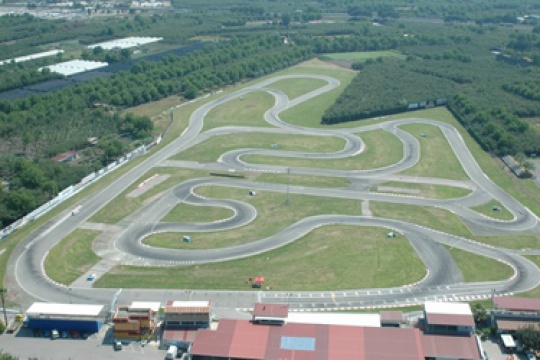 CIK-FIA World Cups for KZ1 and KZ2
According to a certain tradition, international Karting events follow one another at a frantic rhythm towards the end of summer. One week after the second round of the CIK-FIA U18 World Championship and Academy Trophy at Angerville, it is now the gearbox kart specialists who will gather at Sarno, in Italy, for the most important meeting of their season. At the foot of the Vesuvius volcano the competition promises to be… burning hot!

With over 45 horse-power for a weight of 175 kg, Driver included, gearbox karts are tremendous machines capable of reaching 100 km/h from a standing start within slightly over 3 seconds and of achieving top speeds close to 160 km/h. Fitted with brakes on all four wheels, they often deliver a breath-taking spectacle, and the World Cups for KZ1 and KZ2 scheduled for Sarno, less than 40 km from Naples, are undoubtedly a meeting not to be missed. For this occasion the Italian Organiser has indeed modified his circuit and will propose an even faster course which should perfectly suit gearbox karts.

At the technical level there is no real difference between KZ1 and KZ2. Only the tyres used are different (Bridgestone has a de facto monopoly in KZ1 and Vega is the official supplier in KZ2). For the rest, it is the Drivers who make the difference. KZ1 does regroup the cream of the crop, most often Drivers who have made a profession out of Karting. The list of candidates to victory is particularly long and it is quite difficult to tip the winners. Four-time winner of this World Cup in the last five years, Jonathan Thonon (CRG-Maxter) will nonetheless start with great odds for the bookmakers. But, although the Belgian is reputed to come through at every major event, he is also aware that competition has perhaps never been as strong as this year.

In addition to Thonon, three other former winners will be at the start: the Dutchman Bas Lammers (Praga-Parilla), Italy’s vice-European Champion Davide Foré (CRG-Maxter) and his compatriot Francesco Laudato (RK-TM), who for the occasion will make a nice come-back at the highest level. Amongst the other competitors who can win we find the usual top guns such as France’s Arnaud Kozlinski (PCR-TM), on the podium of the European Championship, the Italian Marco Ardigo (Tony Kart-Vortex) who would have donned the European crown had he not abnormally lost fuel, Belgium’s Rick Dreezen (Tony Kart-Vortex) and Yannick de Brabander (FK-Maxter), the Frenchmen Anthony Abbasse (Sodi-TM) and Armand Convers (Kosmic-Vortex), the Briton Ben Hanley (ART GP-TM), the Italian Paolo de Conto (Birel-BMB) who was in the lead of the European Championship before being betrayed by his equipment, or his fellow competitor Fabian Federer (CRG-Maxter) and Holland’s Joey Hanssen (Lenzokart-TM), last year’s World Cup for KZ2 winner. It is however towards another Dutchman that all eyes should be turned, namely Jorrit Pex (CRG-TM). Starting to play with the big boys last June when he won the European title, young Jorrit (19 years old) dreams of confirming his feat by landing this World Cup, which is more indecisive than ever.

Competition also promises to be suspenseful in KZ2, the second division of gearbox karts whose entry list includes more young Drivers and gentlemen-Drivers. The Lithuanian Simas Juodvirsis (Energy-TM), who won the European Championship last June at Wackersdorf, will go for a double. But, like him, many competitors are dreaming of victory in this World Cup. Also knowing what winning is all about, the German Michele Di Martino (Energy-TM), Holland’s Dylan Davies (PCR-TM) or Denmark’s Andreas Fasberg (Tony Kart-Vortex) all seem to be in with a chance as they finished the European Championship in the top 5. On their home ground, however, the Italians should be very competitive: this is the case of Luca Tilloca (Kali’Kart-TM), Felice Tiene (CRG-Maxter), Mirko Torsellini (Tony Kart-Vortex), Flavio Sani (RK-TM), Francesco Celenta (Birel-TM) or Loris Spinelli (FK-TM), winner of the World Cup for KF2 (direct-drive karts) on this very circuit last year.

While it is also worth noting the pleasant Karting come-back of the French automobile Driver Didier André (Zanardi-TM), who made a name for himself in the United States and in Endurance racing, it is however the presence of Max Verstappen (CRG-TM) on the entry list that is already creating a sensation. On the back of demonstrating his ability to adapt to gearbox karts in some preparation events, the Dutchman is right away tipped as a favourite whereas he will compete in his maiden CIK-FIA KZ2 event – an extra interesting feature in a weekend which should please every Karting enthusiast!