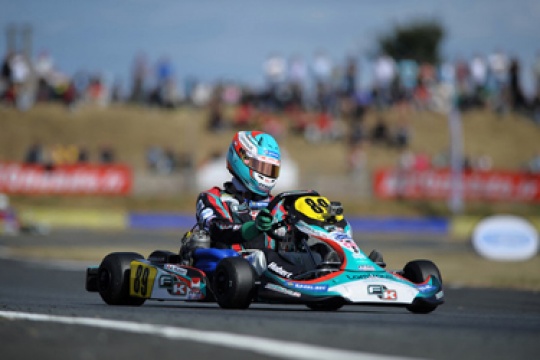 U18 World Championship and CIK-FIA Academy Trophy
On his home soil, Anthoine Hubert totally dominated to win the second Round of the U18 (under 18 year olds) World Championship, contested this weekend in Angerville. In doing so the Frenchman reduced the points difference in the Championship between himself and the Briton Henry Easthope, still leader. In the CIK-FIA Academy Trophy, the Belgian Benjamin Lessennes and the Italian Mattia Drudi cause a sensation by taking their first major international victories. But it was the Finn Joonas Lappalainen who did best of all to increase his lead in the Intermediate Classification.

From the first free practice for this second Round of the U18 World Championship, his adversaries had him down as favourite, and he proved their forecasts right! Fastest in Qualifying Practice, but pushed back to 3rd place after the Qualifying Heats following a technical problem, Anthoine Hubert (FK) stifled the suspense on Sunday in Angerville. Coping best with the difficult phase of the two Prefinals, the second with a totally reversed starting grid, the Frenchman took pole position for the Final before straight away taking orders … never to ease off. “Living in Chartres, it’s as good as being at home here in Angerville,” he explained, a smile on his lips. “I know the track well and I have my supporters to cheer me on. Throughout the weekend, we’ve been in front. There was a technical problem in one Heat which was frustrating, but in the end to win a Round of the World Championship here is a real delight. Now we’re heading for Bahrain! We’ll be discovering the circuit and we’ll have to be on top form from the start. But I intend to do all I can to take the crown!”

Not far behind the Frenchman, the battle was astonishingly calm. The Russian Seva Gagen (Parolin) thought he had finished in 2nd position, but he proved to be under the minimum weight limit after the finish. So the second step on the podium was taken by the Italian Federico Savona (Top Kart), who had driven the two Prefinals perfectly to gain a place on the front row of the grid for the Final. Fourth on the starting grid, the Briton Ricky Collard (ART GP) finished his fight-back in the tracks of Savona … to the very end resisting attacks by Charles Leclerc (ART GP), who was extremely fast at the end of the Race and recording the fastest lap. The Frenchman Hubert Petit completed the Top 5 ahead of the Britons Matthew Graham (Zanardi), Current World Champion, and Henry Easthope (Sodi), who rightly leads the Championship ahead of Anthoine Hubert, Charles Leclerc and Ricky Collard. Unless there is a surprise, it will be these four Drivers who joust for the world title in Bahrain on 10 November next.

There was no lack of surprises in Angerville during the second Round of the CIK-FIA Academy Trophy. On the front row for the first of the two Races, the Britons Alex Gill and George Russell were soon disenchanted. Alex was involved in a serious collision on the first bend which also eliminated or delayed the Finn Alec Weckstrom and the Frenchmen Paolo Besancenez, Erwan Julé and Adeline Prudent. As for Russell, he was leading mid-way, before dropping back steadily to finish in 5th place. From then on, the battle was fought between the Belgian Benjamin Lessennes and the Finn Joonas Lappalainen. And against all expectations the young Belgian resisted the pressure to take his first major international victory. In second place, Joonas Lappalainen once again demonstrated his consistency among the leaders, beating the Spaniard Javier Cobian. Behind this trio, the Belgian Amaury Bonduel took 4th place from George Russell on the very last lap. The Top 10 for this first Race was completed by the Dutchman Martijn Van Leeuwen, the Sri-Lankan Shanaka Clay, the Brazilian Giuliano Raucci, the Italian Mattia Drudi and the Finn Alec Weckstrom, back up after the incident on the first lap and holder of the fastest lap.

As in the first Race, the second confrontation offered the large crowd on the embankments around the track a superb spectacle with much chopping and changing. Taking advantage of his pole position, Benjamin Lessennes dominated the first part of the Race, but he was unable to resist the return to strength of Mattia Drudi, 9th on the starting grid. For Lessennes, any hope of making it a double faded when he made contact with Joonas Lappalainen, pushing him back to 6th place, the Finn having to be content with 4th place. Starting from 12th and 10th positions respectively, the Frenchman Paolo Besancenez and the Finn Alec Weckstrom could not have done more and took the two lower steps on the podium alongside Mattia Drudi, scoring the greatest victory of his young career. The Russian Alexander Maslennikov, 13th on the grid, could also be proud of his superb fight-back to take the points for 5th place. Behind Benjamin Lessennes, the Top 10 also included the Spaniard Javier Cobian, the Frenchman Erwan Julé, the Swede Otto Tjader and the Belgian Amaury Bonduel.

At the end of this French weekend, the best business had been done by Joonas Lappalainen. The Finn will in fact arrive in Bahrain at the beginning of November with a relatively comfortable lead over the Spaniard Javier Cobian and the Briton George Russell. However there are others with a mathematical chance of winning the 2012 Academy Trophy, like Mattia Drudi and Paolo Besancenez, both in the provisional Top 5. There is no doubt that the battle will be hard fought in the Final of the competition!