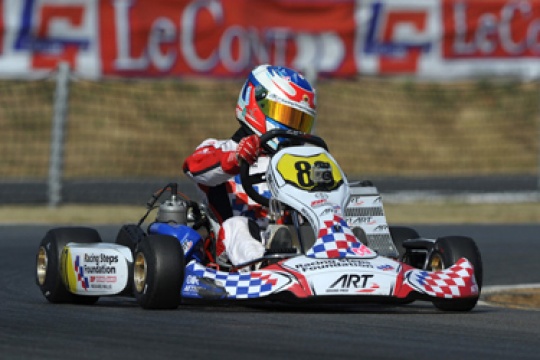 U18 World Championship and CIK-FIA Academy Trophy
On the French soil of Angerville, the British hit hard on Saturday. Second in Qualifying Practice for the U18 (under 18 year olds) World Championship, Ricky Collard then remained unbeaten in his Qualifying Heats, taking pole position for the first Prefinal. In the CIK-FIA Academy Trophy, two other Britons, Alex Gill and George Russell, will start from the front row of the grid for the first Race in that category.

In unsettled weather, the skies opened a little for Qualifying Practice. Cheered on by his supporters, local man Anthoine Hubert (FK) made his way through the rain to post the fastest time ahead of Ricky Collard (ART GP), the Monegasque Charles Leclerc (ART GP), the Russian Seva Gagen (Parolin) and the Dane Martin Mortensen (FK). Championship leader, the Briton Henry Easthope had to indulge in damage limitation to take 7th place.

Already dominant in damp Practice, Anthoine Hubert and Ricky Collard confirmed their strength in the Qualifying Heats contested in ever increasing sunshine. The Briton remained unbeaten whilst the Frenchman lost some places in the Intermediate Classification after being let down by a starter motor, climbing from the back of the pack in a Heat in which he finally finished in 6th place. In the end, Anthoine came out with an honourable 3rd place in the Intermediate Classification. Between Collard and him was Charles Leclerc who will therefore start from the front row of the grid for the first Prefinal, on Sunday.

The Top 5 in the Intermediate Classification was completed by Martin Mortensen and Henry Easthope, with the Australian Joseph Mawson (Top Kart) in 6th place. So behind Collard, although in a different order, are the five Championship leaders. No doubt the strong men of the start of the season will not be letting up at all and the final phase promises to be extremely exciting! Remember that two Prefinals are on the programme (the second with a totally reversed starting grid) and that the cumulative results of these two will determine the starting grid for the Final, scheduled for 16.05, under the sun which is forecast for the entire day.

It was not only in the U18 World Championship that the favourites reminded us of their presence. In the CIK-FIA Academy Trophy, the Britons Alex Gill and George Russell confirmed their showing during the first round in Braga, and finished the Qualifying Heats in the first two places, to monopolise the front row of the starting grid for the first Race. Fastest in Qualifying Practice, the Finn Alec Weckstrom finished in 3rd place after winning two of his three Heats. In the Top 3 for Qualifying Practice, the Frenchman Paolo Besancenez and the Finn Joonas Lappalainen, incidentally Championship leader, then took 4th and 5th places on the grid, ahead of the Frenchman Erwan Julé, the Swede Otto Tjader, the Spaniard Javier Cobian, the Belgian Amaury Bonduel and the Italian Mattia Drudi. So many Drivers are aiming to take the chequered flag in the two Races scheduled for 13.20 and 15.30. With sun forecast and a packed house expected, it promises to be quite a show!

Numerous supporting events are planned for the Angerville circuit, including a fly-past by the “Patrouille de France” (the French Air Force precision flying team) and demonstrations of historic karts which were already a great success with the crowd on Saturday. To see how karts have evolved over the last five decades is a treat both for the nostalgic and the young alike, and a fine way to remind everyone that this year the CIK-FIA is celebrating its Golden Jubilee!