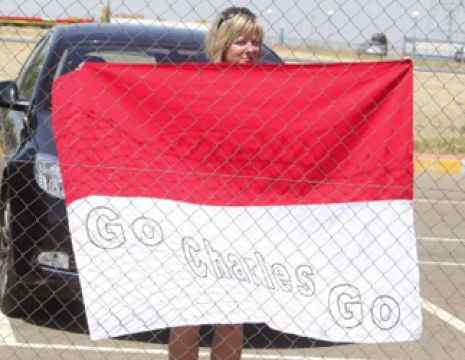 On the Spanish racetrack of Zuera, the 2012 WSK Euro Series hit its final round of the season, and ART Grand Prix cruised to title in the KF2 class thanks to Monaco-based driver Charles Leclerc. A really valuable team effort was completed with the fourth place finish of Ben Barnicoat.

For the Karting Division of ART Grand Prix, the weekend in Spain, as well as the results scored on-track, proved really rewarding as Leclerc confirmed his leader status by cruising to a deserved win in Race 2. Race 1 was won by a large margin by Barnicoat, who had clocked the fastest lap in qualifying. The KZ class also brought some good results, as Ben Hanley was able to capture a podium finish in the first final and stayed among the frontrunners in Race 2 despite an engine problem.
In the KF3 class, the Junior racers of ART Grand Prix continued to grew. Sérgio Sette Camara and Yifan Xia clocked good laptimes despite the fact that they were running at Zuera for the first time. Unfortunately though, Yifan Xia was involved in an incident and eventually suffered from a broken collarbone. He has already been admitted to the Formula Medicine health centre in Viareggio, where a medical staff led by Doctor Riccardo Ceccarelli is already taking care of him. We wish Yifan a prompt recovery and we hope to see him on-track soon.

Q&A with Armando Filini:
The 2012 Season has brought to you an important achievement like a WSK Euro Series win. Did you expect to dominate the KF2 class like eventually happened?
"Honestly, we didn't. Of course we had the goal of being competitive and stay among the frontrunners, but compared to our early expectations we performed better than we thought. I'm really satisfied with one aspect in particular. We performed great in all conditions, cold, hot, dry and wet. We put on-track a product that, alongside its speed, proved able to adapt to any condition".

It's been just one year after the birth of Art Grand Prix Karting Division, what have been the toughest challenges?
"We started from zero, and even tough I put all my experience at the team's disposal, there were a lot of new things to manage, for example the relations with our suppliers and technical partners. We eventually managed to find some great partners. Time as always been one of our worst enemies. In just a few months we had to get a number of homologations and at the start it reduced the time we could dedicate to testing and development. In the end, the chassis proved great and the work flowed almost flawlessly. This aspect is a reward for all the people who have been part of the project. Winning among some long-standing companies like in go-kart racing is not easy and our rivals definitely deserve some respect".

How did it go for your KZ operation in Zuera?
“Finally we managed to start in the right way since early practice. A lot of times our driver Ben Hanley saw his racing weekends hampered by unfortunate breaks or incidents in the early stages and quite often they did not depend on us. In Spain, Ben clocked the third fastest time in qualifying, ended up the heats in second and third and kept his name at the front. In Race 1 he ended up onto the podium, while an engine problem slowed him down in Race 2. In the end, he wound up in seventh. Overall it's been a good weekend".

Speaking of the KF2 class: it's been a top weekend at Zuera!
“It went all great since the start. Barnicoat cruised to the Super Pole. During the same session, Leclerc suffered from a carburetor issue and stopped along the track. He was credited with the last spot (the 12th) but he started a great recovery in the following heats thanks to a first and a third-place finish. In the first Final, Barnicoat dominated by scoring a large win, while Leclerc made up in the following race. In the closing run of the weekend, Barnicoat was in third before being bumped off by a rival. He lost two spots to take fifth, while Charles scored an highly-impressive win with a flawless ride to the finish".

In the end, Leclerc and Barnicoat proved the stars of the series…
"Charles confirmed his talent after having been one of the top favourites for the championship from day one. Barnicoat has been a pleasant surprise. We have to consider that the one at Zuera has been just the 5th international race for this Racing Steps Foundation-supported young man. Despite the lack of experience he performed in a sensational way. On a single lap, he's stunning and sometimes makes you think that there must be something wrong with the clock! He has to improve the tire management part, but he has plenty of skills and the time to accomplish that. Charles is a great driver and in addition to his skills and class, he has the maturity needed to manage any racing situation. He always has a chance to fight for wins even when he's not starting at the front. The WSK Euro Series final standings are a perfect example…".