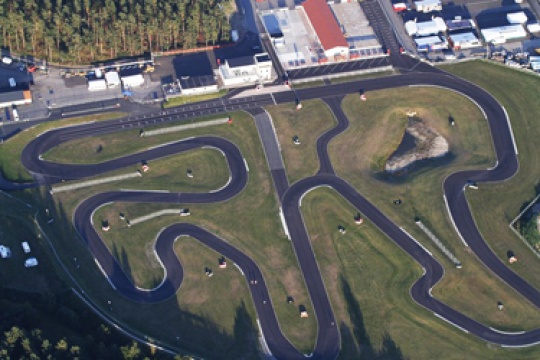 The stunning Asum Ring near Kristianstad in Sweden’s south has made an impressive debut this weekend to join the select list of circuits who have presented the ROTAX MAX EURO CHALLENGE throughout the past nine years since the series started, introducing yet another host nation to the competitive European championship.

Providing nothing short of excellent facilities and a technically challenging CIK-FIA homologated circuit, the location just 10 minutes from the seaside offers the EURO CHALLENGE competitors a completely new complex for the third round of the 2012 series.

Roland Geidel of RGMMC Establishment, as organisers and promoters of the ROTAX MAX EURO CHALLENGE, claims they are extremely pleased with the decision to be racing at the Asum Ring which has not disappointed the many drivers and their teams who are participating in this weekend’s meeting. “We’re very happy to bring the Euro Challenge to my home country of Sweden for the summer edition. The facilities are fantastic and ideal for this event. The members of the Kristianstad Karting Club have worked hard to ensure everything was prepared as needed. We have had a lot of positive comments from the competitors, teams and supporters, only confirming they are pleased with this venue for round 3 in 2012. Now, we’re looking forward to some great racing and in the future I honestly believe this can be one of the World’s best karting circuits.”

The 1,231 metre track owned by the local Kristianstad Karting Club since 1966 has undergone major changes and upgrades to achieve the opportunity to play host to the event over the past two years, taking the circuit to another level after being regarded as one of the best in Sweden in past times. Working towards their “VISION 2015” goal, the 120,000 square-metre Asum Ring complex is still to be completed with more of the facilities that are now expected at events as the ROTAX EURO CHALLENGE, while also aiming to be considered to stage the World Karting Championships by their 50th anniversary.

Promoter for the Kristianstad Karting Club, Jörgen Andersson, says the opportunity to welcome such an internationally renowned championship has seen the invaluable support of the Swedish Federation (SBF), many local partners who have invested their time and resources to make the Asum Ring what it is today, as well as numerous dedicated club members. “As a club, we have set our goals through our vision to make the Asum Ring the best we can and attractive for such events as the ROTAX EURO CHALLENGE. In the past years, we had hoped to be one of the tracks chosen to host the national Swedish championship, so we’re now very proud to welcome ‘the Euro’ to our circuit for the first time. It’s exciting for us and we hope the drivers and teams enjoy what offer them here at Asum, while we wish them the success for the racing.”

At the half-way mark in the championship, the classes being contested this weekend include the Rotax Junior Max, Senior Max and the Rotax DD2 gearbox category that also comprises the DD2 Masters. It’s a crucial round in the series for the 2012 European titles, where the battle for the lead in the various classes is really close. In Senior Max, the first 3 places are held by British drivers with Edward Brand just 2 points ahead of previous leader Harrison Scott, then first round winner Sean Babington. Janneau Esmeijer took victory in juniors at the second round at Wackersdorf over the round 1 winner Harry Webb, but they sit on equal points in the overall standings coming into the Swedish meeting. The DD2 class sees the 2012 vice champ Mathias Detige with a 3-point gap to Miika Laiho who claimed the honours at the first round while the lady of the class Tamsin Germain leads the Masters after taking both rounds up until now this season.
There’s been some fabulous racing from the initial round in Belgium with a change to the series leaders at the following round in Germany, so it looks set to be another great event at Kristianstad as the circuit, the weather and the atmosphere all contribute.