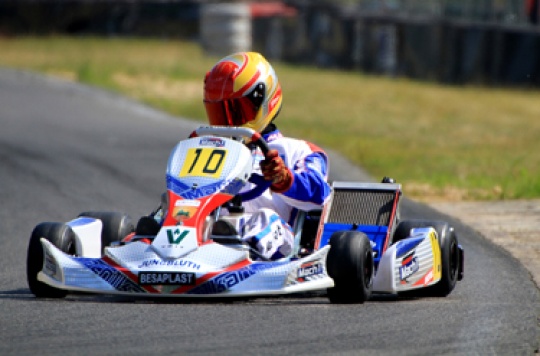 Last weekend, the Mach1 Motorsport team travelled to the third race of the ADAC Kart Masters in Kerpen with 11 drivers of 5 different classes. Next to sportive choices, the focus was on the weather this time. The Mach1 crew kept track of everything though and even managed to extend their lead in the KF2 class.

Lucas Speck had taken the lead in the overall KF2 ranking at the previous race in Ampfing and was not willing to give it up at the halftime race in Kerpen. Coming in second during qualifying, he had a great start, but then had to deal with a falling out due to an engine breakdown during the first Heat. Subsequently, everything went smoothly during the second Heat, he drove in the front field and came in second. This secured him the 13th starting position in the first final on Sunday morning. On the wet track, the Rhinelander started a great catching up race and fought his way to places 8 and 5 respectively. Due to this successful performance, Lucas was able to extend his overall lead and has legitimate chances to win the Championship title.

His teammate Manuel Valier showed a great performance as well. After reaching sixth place during qualifying, he finished both Heats on third place, thus starting into the first final race on 3rd position. On the wet track, he came in sixth during the first race. In the second race, he managed a perfect start on the drying track and fought his way to second position in only a couple of minutes. A slip-up due to the wet conditions threw him way back though. The Munich resident then proved his great talent with an impressive catching up race and finished on 10th place. Lisa-Christin Brunner had some bad luck again – she had to deal with technical difficulties throughout the entire weekend. Even though she placed on the promising 23rd position in the first race, she had to accept a falling out during the second.

At the KF3 juniors, Cedric Piro repeatedly caused team leader Martin Hetschel great joy. From the beginning, the young Saarland resident established himself in the top group of the field consisting of 42 drivers and successfully started the racing weekend by coming in 9th during qualifying. He then managed to increase his performance during the Heats. Due to placing 2nd and 7th, he gained two starting positions and started perfectly into the first race. Cedric temporarily drove on second position, but got into the off due to the wet track and fell back a couple of positions. When he reached the finish line, he was on the great 7th place again. There was great excitement prior to the finals. The track began to dry, making the choice of the right tires a lottery-like situation. Finally, Cedric chose wet tires, which turned out to be the wrong choice. During the first third of the race he was faster than his pursuers, but as the laps continued he fell back behind the drivers who had chosen tires without patterns and came in 8th. In the overall ranking, he is still close to the front, ranking 4th. In preparation for the U18 world championship, Chris Dahlmann started in Kerpen in a Mach1 Chassis. He did not experience a lot of luck during the races though. Having qualified for the finals as the 16th driver, he had to park his kart in the off before the race had even started. The driver starting behind him had crashed into his kart during pre-start so hard that his chain had ripped. During the second race everything went smoothly then. Chris fought his way through the field under difficult conditions and came in 19th.

Five drivers started in the IAME X30 and IAME X30 juniors. Fastest driver of the seniors was Alexander Heil. The repeated WAKC-champion crossed the finish line on 4th and 6th place respectively and thus held his 7th position in the list of rankings. Lukas Korsch managed to place in the points in both races as well and is currently grazing a top ten position. In the meantime it was a weekend to forget for Jan Jesse. After placing 18th in the first race, he had a falling out during the finals due to a technical defect. At the juniors, Loris Prattes and Sebastian Schwendt experienced an eventful start into the third race of the season. Having gained starting position 25 during qualifying, Schwendt improved his performance up to 13th position during the first race. He then had a falling out in the second race, during which he had ranked 7th, due to a technical defect. The races went the other way around for Prattes. He had a falling out during the first race due to a collision, but then managed to fight his way to 15th position during the finals.

Toni Greif started at the shifter karts as a soloist and managed to fight his way forward in the overall list of rankings despite a falling out. Greif had to end the first race prematurely due to the torrential rain, then showed his fighting spirit in the afternoon and just barely missed placing on the winner’s podium, coming in 4th.

Team leader Martin Hetschel was glad to successfully have survived the weather chaos on Sunday evening: “It hasn’t been an easy weekend for all of us. The rain took its toll on our drivers on Sunday. Everyone gave it their all and our karts have managed to impress even under these conditions. Lucas is still in the lead of the overall ranking and Cedric, Manuel, Alexander and Toni are standing chances in their classes as well.”

The next highlight of the year awaits the German Chassis manufacturer in just a couple of days. In front of a native audience, the CIK-FIA KZ2 and KF2 Kart European Championship will take place at the Prokart Raceland Wackersdorf. Mach1 will participate with five drivers.