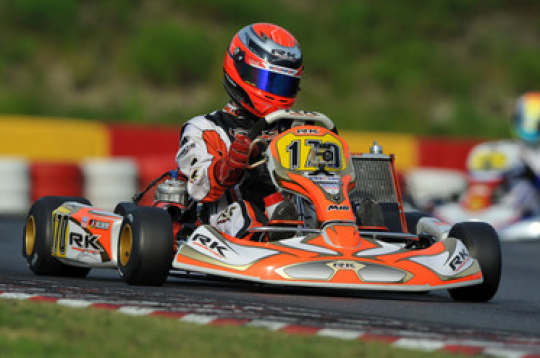 With 253 Drivers for Scrutineering, the paddock at the Prokart Raceland circuit in Wackersdorf could not be any livelier, and followers were impatiently awaiting Qualifying Practice for the European KF2 and KZ2 Championships at the end of the day on Thursday.

Recording a fast time was more vital than ever if Drivers were to be in the vanguard in the many Qualifying Heats. Because there can be no doubts: both in KF2 and in KZ2, disputes will be energetic for allocation of the 34 places in the Final…

Consolidating hopes in the main, the KF2 category is incredibly open. At the end of Qualifying Practice, no fewer than 94 Drivers had posted times within a second of each other! At this level, the slightest detail can make all the difference … the time gap between first and second alone illustrates the intensity of the battle. In second place, the Czech girl Tereza Gromanova was only 4 thousandths away from pole position. Ahead of her was the surprise of this session of Qualifying Practice: the German Driver Michaël Waldherr (RK-BMB). “Wackersdorf is my favourite circuit, but I would never have dared to imagine this,” smiled the 15-year-old, already determined to take every single opportunity over the next three days (Qualifying Heats on Friday and Saturday and two Races on Sunday).

Third best time, Benjamin Barnicoat (ART GP-Parilla) was relegated for a technical irregularity with his engine. Forced to start form the back of the pack in all his Qualifying Heats, the British Driver already knows that his task will be formidable if he is to be among the 34 finalists.

Also contested on Thursday, the Qualifying Practice for KZ2 (the second division for karts with gearboxes) was dominated by the Czech Driver Jan Midrla (Birel-TM), who was more than 2 tenths of a second faster than any of his adversaries. Flavio Sani (Birel-TM), Italy, was the best of the rest, ahead of Douglas Lundberg (CKR-TM), Sweden, Marvin Meindorfer (Tony Kart-Vortex), Germany, and Kevin Gyr (Tony Kart-Vortex), Switzerland.

Unlike those in the KF2 and KZ2 categories, the 34 candidates for the title of European KZ1 Champion (the top category for karts with gearboxes), have to wait until Friday morning for their first Qualifying Practice. The young Dutch Driver Jorrit Pex (CRG-TM) hopes to confirm his best time in Non-Qualifying Practice, but the contest between the karting heavyweights promises to be more than simply undecided and suspense is sure to be the watchword.