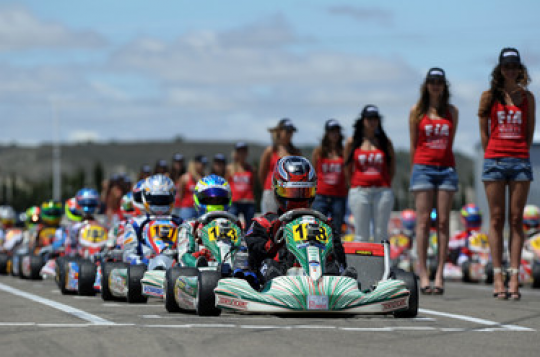 A little more than six months after crowning Nyck De Vries, the Suzuka circuit will host again the World KF1 Championship from 17 to 20 May. This time the Japanese track will be the scene of the first event of a competition which will see the fight between karting stars and ...
by CIK P.O.

With 38 candidates for the CIK-FIA World Champion title, the first event of this competition promises to be interesting on several grounds, and in particular because we shall witness a generation gap: on the one hand, a few Karting professionals want to add a world crown to their list of results; and, on the other one, many young Drivers for whom a World Champion title could be a springboard for the highest echelons of Motorsport.

Amongst the most experienced Drivers, there will notably be the Karting legend Davide Foré (CRG-BMB). Already four times World Champion in the top category of direct-drive karts, the 37 year-old Italian is determined to show to his young opponents that he is still entitled to have his say at the highest level. Likewise, the 2009 World Champion Arnaud Kozlinski (PCR-TM) will have a sole ambition: to win a second crown! As for Belgium’s Yannick de Brabander (FK-TM), winner of the World Cup for Super KF on this very Suzuka track in 2009, he is also dreaming of making a victorious comeback on the ground of his finest win.

These three top-guns will clearly be the references for the younger Drivers or those who have already landed titles in lower categories. Such is the case of Britain’s Matthew Graham (Zanardi-Parilla), last year’s U18 World Champion (under 18 years old). It will also be worth keeping an eye on France’s Anthoine Hubert, third in that U18 Championship, the Italian Flavio Camponeschi (Tony Kart-Vortex), who stepped on the podium of the 2011 World KF1 Championship, the Dutchman Max Verstappen (Intrepid-TM), the Pole Karol Basz (Birel-BMB), Italy’s Felice Tiene (CRG-BMB) or Britain’s Tom Joyner (LH-BMB)…

Not forgetting the Japanese, who will be in their home land. Although they do not always compete in Europe on a regular basis, 13 of them dream to create a surprise in front of their supporters. Last year, Daiki Sasaki (Kosmic-Vortex) and Kazuya Ishii (Birel-BMB) showed how competitive they were in the championship final. This time they will clearly target the podiums! Like their competitors they will have four opportunities to score championship points: after practice and the qualifying heats (two per Driver), two Races are scheduled on Saturday and two more on Sunday.

As well as the World KF1 Championship, Suzuka will also host the Asia-Pacific Championship of the KF2 category, the Hopefuls’ class. With 20 representatives out of 30 entries, Japan will have the advantage of numbers. They will be joined by Drivers from Singapore, Hong-Kong, Australia, Thailand, as well as Argentina and Europe. Unlike the KF1 category, this championship will be held in a single Final, scheduled for Sunday at the end of the day – a competition which will certainly not lack in spectacle and suspense!