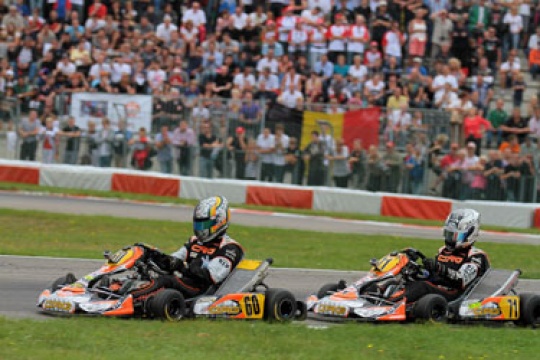 Picture shows Jonathan Thonon racing towards the victory of the KZ1 World Cup in 2011; behind him Davide Forè, both on CRG-Maxter and CRG official team drivers this year too.

The new racing season is about to start and CRG is all set and ready to get onto the track for the first challenge of the year, the Winter Cup of Lonato. CRG official team has changed most of its members and its new drivers have all the characteristics and the talent to fight for the success, together with the "old" and already successful CRG champions. From the technical point of view, CRG can enjoy the potentiality offered by the brand new and just homologated chassis and by the more and more performing Maxter engines.

THE TARGET IS VICTORY. The Winter Cup of Lonato, as usual, is the first test for all the team. Good sports and technical responses are expected; then CRG will be full operating to face the 2012 season in the most prestigious international championships. For a winning team like CRG, world leader of the sector, the target is always the same: victory!

GREAT POTENTIALITY IN KZ2. In the Winter Cup, CRG fields its best drivers in all the three categories, from the most performing category, the KZ2, where the team is led by the new world champion Jonathan Thonon, four time winner of the category with gearbox and well motivated to achieve great results this year too. The great potentiality of CRG in KZ2 is completed by the five time world champion Davide Forè, by the young but already interesting protagonist of international karting Mirko Torsellini, winner in the recent WSK Final Cup, and by Fabian Federer, from this year a fully-fledged official driver after the titles he won in the KZ2 Italian and European championships on CRG.

GREAT EXPECTATIONS ALSO IN KF2 E KF3. Also in KF2 and KF3 CRG stands great chances for victory. The team aims at confirming and renewing its leadership also in this junior categories. In KF2 CRG fields its best drivers: the confirmed Jordon Lennox-Lamb and Felice Tiene, last year's protagonists in the KF1 world championship, and the new team member Luke Varley, a young English driver with great potentialities. Also the KF3 team is excellent, with the American Santino Ferrucci, the Spanish champion Alex Palou and the Brazilian Victor Baptista.
In this race, in KF2 also Alessandro Vantini and the French Ingrid Girard are racing for CRG.

In Lonato there is going to be also the debut of the LH Racing Team by Lewis Hamilton, with the chassis produced by CRG. In KF2 the English Tom Joyner and Shaun Slavin will be on the track, besides the Danish Christian Sorensen.

The programme of the Winter Cup of Lonato: free practice starts on Thursday 16th February, while the qualifying session starts on Friday 17th, followed by the qualifying heats which continue on Saturday 18th February. On Sunday 19th February the second chance heats and then the final phase with pre-finals and finals in KZ2, KF3 e KF2.