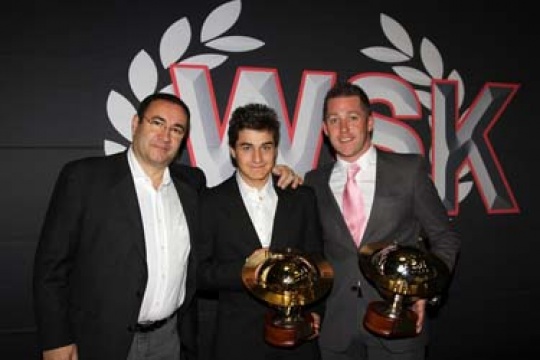 CRG ALSO GETS THE EURO CUP TROPHY IN KF3. IN THE WSK MASTER IN KZ2, THE PRIVATE DRIVERS DELLI COMPAGNI AND HABULIN WERE CELEBRATED. ZANARDI “APPOINTS” DE VRIES CHAMPION OF THE YEAR.

CRG, as usual, stood out on the occasion of the 2011 WSK racing season gala, and not only thanks to its strong "all black drivers" of the official team - who had a particularly successful season - but also thanks to its more and more performing and numerous drivers of theprivate teams, who in 2011 raced and won on the chassis of the Italian manufacturer. Then CRG Group filled with pride at the end of the final standing ovation which celebrated Nyck De Vries, i.e. the Driver of The Year. Nyck dominated the season of the International kart championships on a Zanardi chassis produced by CRG. 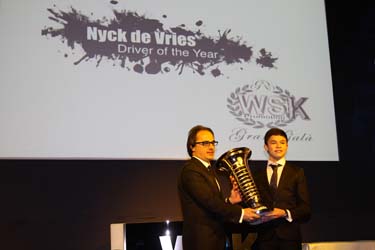 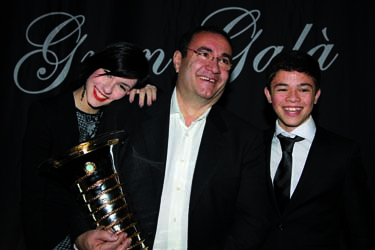 TORSELLINI AND VERSTAPPEN CHAMPIONS. Mirko Torsellini - winner of the WSK Final Cup in the KZ2 category and runner-up of the WSK Euro Series, always in KZ2 - and Max Verstappen - winner of the KF3 WSK Euro Series - received their share of applauses for the titles they got in the WSK international series. CRG also got the prestigious Euro Cup reserved to teams and constructors.

CELEBRATIONS ALSO FOR DELLI COMPAGNI AND HABULIN. Daniele Delli Compagni and Kristijan Habulin were celebrated for the good results achieved in the WSK MasterSeries. They are both private drivers and ran successfully on CRG chassis, eventually placing second and third respectively in the KZ2 category after a hard-fought battle with the category winner, Marco Zanchetta.

ZANARDI “APPOINTS” DE VRIES. The highlight of the Gran Gala was the election for the Driver of the Year, the final act of theannual prize-giving ceremony. Before starting the procedure for the election there was a greatly appreciated and applauded intervention of Alex Zanardi on video. The champion from Bologna made a list of the great qualities and skills of the young Nyck De Vries, who was deservedly awarded the new trophy "Champion of the Year" with everybody's consent. The prize is at its first edition and was instituted by  WSK Promotion.
Alex Zanardi's intervention was really touching for all the guests of the Gala. Zanardi did not forget to give credit both to the team manager Dino Chiesa and to the owner of CRG, Giancarlo Tinini, the constructor of the Zanardi chassis whose qualities contributed to make De Vries an invincible kart champion.

CRG IN THE 2012 WSK. In 2012 CRG, with its racing team, is officially taking part in all the championships of the WSK Promotion, starting with the WSK Master Series, then the WSK Euro Series, the WSK Final Cup and the WSK Champions Cup. CRG is racing  in KZ1 with the Belgian Jonathan Thonon, the Italian Davide Forè, Fabian Federer, Mirko Torsellini and the Dutch Jorrit Pex; in KZ2 with the English Jordon Lennox-Lamb and Felice Tiene, who are also racing in KF2 together with the two English Luke Varley and Tom Joyner (the latter on a LH chassis); in KF3 with the Spanish Alex Palou and the American Santino Ferrucci.