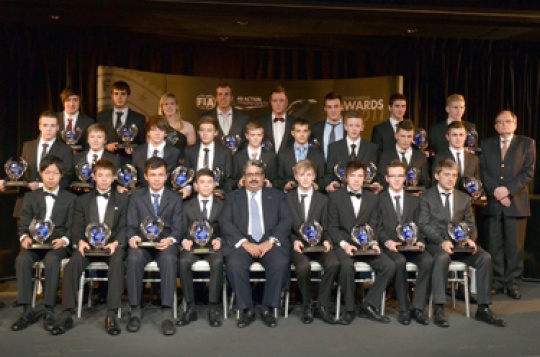 The International Karting Commission of the FIA (CIK-FIA) started the year 2012 in dignified fashion by rewarding its Champion Drivers of the 2011 season on Saturday 7 January in Paris, at the Pavillon Gabriel, near the FIA headquarters and just off the famous Champs Élysées and Place de la Concorde. Opened in the presence of the FIA President, Jean Todt, the ceremony has honoured nearly 30 award-winners.

The President of the CIK-FIA, Shaikh Abdulla bin Isa Al Khalifa, stated: “2011 was a great season which revealed very worthy Champions. In some Championships, including the World KF1 Championship, the Drivers tipped as favourites were the winners, but several others saw private and non-official team Drivers create pleasant and sometimes resounding surprises. This glorious uncertainty of sport makes the beauty of Karting. We have just turned the 2011 page and are already looking at the future. The 2012 season promises to be exciting as it will introduce the new concept of engine lottery in the World KF1 Championship, thus set to balance the chances of all the protagonists, and as there will be an even increased presence of chassis makes in the ‘U18’ World Championship. Not forgetting that in 2012 the CIK is celebrating its 50th anniversary.”

Already rewarded last December in India on the occasion of the FIA Gala when Sebastian Vettel (F1), Sébastien Loeb (Rallies) or Yvan Müller (WTCC) were also honoured, the two Karting World Champion Drivers logically received the biggest rounds of applause in Paris. Nyck de Vries’ future promises to be bright – and so does that of the World KF1 Championship runner-up, Alexander Albon; they have both brilliantly completed their careers in Karting and will switch over to Motorsport this year. ‘U18’ World Champion Matthew Graham will have another helping in Karting and has announced that he was planning to enter both World Championships in 2012, KF1 and ‘U18’. Graham’s performance has also earned the Zanardi brand the official title of 2011 CIK-FIA Karting World Champion for Makes.
Amongst the laureates, two Junior Drivers went home with their arms full of trophies: Monaco’s Charles Leclerc for landing both the Academy Trophy and World Cup for KF3, and the Norwegian Dennis Olsen, winner of the Viking Trophy and of the North KF3 European Trophy. The other 2011 World Cups have rewarded the Italian Loris Spinelli (KF2), the Belgian Jonathan Thonon (KZ1) and the Dutchman Joey Hanssen (KZ2). Two Japanese Drivers successively found themselves in the limelight, Daiki Sasaki and Arata Saeki, both crowned Asia-Pacific Champions, the former in KF1 and the latter in KF2. Thanks to young Paolo De Conto (18 years old) and Emmanuel Vinuales (26), respectively European Champions in categories usually more favourable to seasoned campaigners, KZ1 and Superkart, the average age of the 2011 award-winners is neatly lower than in previous years.


In addition to the trophies handed to the winners of the other CIK-FIA Championships, a few extra special prizes have been awarded. Like last year, Holland’s Beitske Visser received the prize jointly offered by the CIK and by the FIA “Women in Motorsport Commission”, rewarding the most deserving female Driver of the 2011 season. Only female Driver and KZ1’s cadet, she distinguished herself by leading the World Cup before being forced to retire. No female had yet shown such potential in that top category of gearbox karts which is reputed to be so demanding and has now become the reserve of works teams and of Drivers who have turned into Karting professionals.
Some 185 guests attended the gala, and they were also called upon to vote for the photograph of the year. The picture taken by Philippe Kalmès, of the KSP agency, was “elected”.
A large selection of photographs of the «2011 CIK-FIA Karting Awards» ceremony is available on www.cikfia.com (http://www.cikfia.com/media/photos.html).