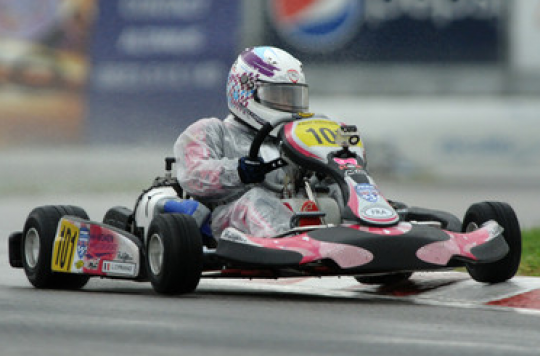 Fifteen-year-old Lucile Cypriano, selected by representatives of the CIK-FIA and Women in Motorsport Commission to receive a funded drive in the 2011 CIK-FIA Karting Academy Trophy, finished her inaugural season in the series 17th in the overall classification after the final round at Sarno, Italy. Her highlight of the three-round series was claiming pole position at the opening round at Ortona in July.

The overall winner of the 2011 CIK-FIA Karting Academy Trophy was 14-year-old Charles Leclerc from Monaco.
Thirty-five drivers were competing in the Academy class last weekend and, while practice took place in dry conditions, the youngsters’ skills were tested to the limit in wet conditions during both the final races on Sunday. After the three Qualifying Heats - in which Lucile finished 8th, 6th and 5th - she started 10th on the grid for Race 1 but lost position and finished 17th.
"It rained a lot on Sunday morning, to the point that the track was hardly driveable,” said Lucile. “It was my very first time in the rain with the Academy Parolin kart and I also had no experience of the LeCont tyres, which are mandatory in that Championship. It took me some time to get use to them and to find the right lines on the wet track as well.”
Starting from that position for the second race, Lucile ended up 23rd, coping with yet more tricky weather conditions. “For Race 2, as the weather was improving, we bet on a dry-conditions set-up. But the track dried very slowly and inconsistently. On one part of the track our set-up was quite okay, but on the other sector it proved totally wrong. It really was a difficult race. "

“I really enjoyed the Academy competition. This is a very good formula, with all these nations and identical karts for all. I am of course a little disappointed with my results, but on the other hand we also showed very good pace on occasions. It was a very nice experience to be the young ambassador of the FIA Women in Motorsport Commission and an honour to be selected. It gave me extra media attention and it also opened doors for me, as I have recently been offered a three-day test session in a formula car in Germany. At this stage, with my parents, we haven't decided yet where and what to race in 2012; it could be a single seater or a kart again. It will all depend on opportunities and budgets."
Lucile, from Cheney in France, won this opportunity following a two-day shoot-out against eight other young karters vying for a drive in this low-cost educational formula for 13-15 year olds.