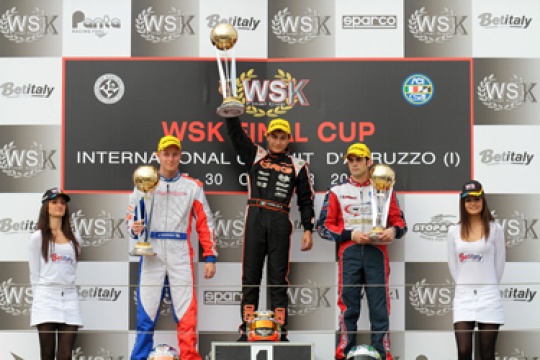 TORSELLINI IN KZ2, AFTER THE TROUBLES IN THE QUALIFIYNG SESSIONS, MANAGES TO RECOVER AND WIN THE FINAL. GOOD PERFORMANCE FO FORE', TIENE AND LENNOX IN KZ1 TOO. KOZLINSKI RETIRES WHEN FOURTH. GOOD PERFORMANCES ALSO FOR THE CRG AND LH DRIVERS IN THE OTHER CATEGORIES.

Ortona (Chieti - Italy). Mirko Torsellini finally grabbed the prestigious result he had so many times missed by the skin of his teeth this year. On a CRG chassis as performing as usual and powered by a Maxter engine excellently set up by the parent company's technicians, the young CRG driver won deservedly the WSK Final Cup title on the International Circuit of Abruzzo in Ortona (Italy). Mirko won the title defeating the new world champion, the Dutch Joey Hanssen, and his most strenuous rival, Marco Zanchetta.

TORSELLINI FROM LAST TO FIRST. Torsellini's weekend had not started in the best way possible. He had a technical trouble to one of the wheels at the start of the time trials in Ortona, and this is the reason why his win is even more valuable: in fact, in the race, he managed to recover from the last position in a crescendo of results throughout the three heats and the pre-final, which - by the way - was not run in excellent conditions because of carburetion troubles. So, Mirko was finally able to win his category in the final, giving CRG another important success after the CIK-FIA world championship won by Jonathan Thonon in KZ1 and the WSK Euro Series achieved by Max Verstappen in KF3.

Torsellini passed first in KZ2 under the chequered flag of the WSK Final Cup in Ortona and placed overall sixth in the ranking which includes also the KZ1 drivers, finishing his performance preceding two other great CRG fighters such as Davide Forè and Felice Tiene, placed respectively seventh and eighth. On the other hand, the special prize for the unluckiest driver goes to the other standard-bearer of the Italian constructor: Arnaud Kozlinski, who was obliged to retire at half race because of a problem to the transmission chain while occupying the fourth position andaiming at the podium. Anyway, a special praise goes to Tiene, at his debut in the gearbox category, who found himself immediately at ease, as well as his teammate, the English Jordon Lennox-Lamb, overall eleventh at his first experience inKZ1.
The KZ1 title went to Bas Lammers, after fighting first against Hajek and then against Ardigò. 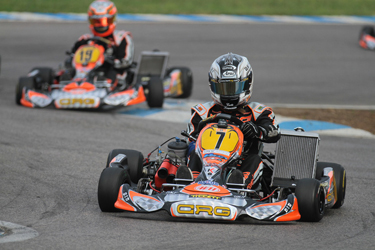 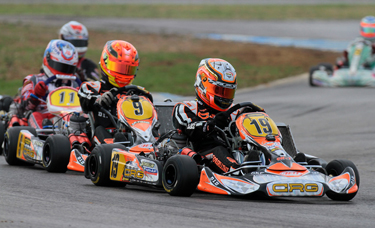 OTHER CATEGORIES. In KF2 the British champion Tom Joyner, on LH by Lewis Hamilton of the Italsport Team, achieved a good recovery from the back rows of the starting grid where he had been relegated after a crash occurred in the pre-final. He eventually placed 16th in the final. The title went to the Norwegian Dennis Olsen, at his second race in this category.
InKF3 Jinya Yamakawa, on CRG-Tm, confirmed once more to be one of the best drivers. He finally placed 18th, a bit penalized by the vehemence of his young rivals. The title was won by the Danish Nicklas Nielsen.
Inthe 60 Mini excellent fifth position of the Spanish Eliseo Martinez Merono, on CRG-Parilla. He was always among the best throughout the whole event until the final placing. The title of the junior category was won by Lorenzo Travisanutto.

All the results on www.wsk.it