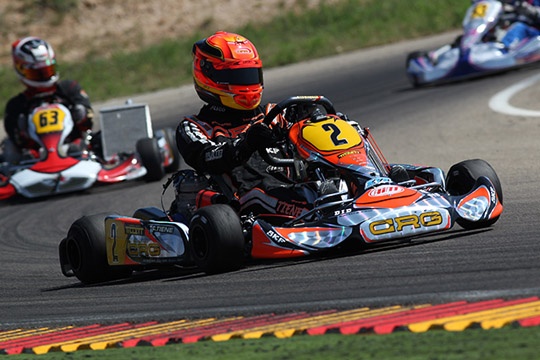 Press Release by: CRG
Felice Tiene in the first round of the European Championship in Spain
Max Verstappen is still in the fight for the European title after the third place obtaine in Alcaniz. Strong chances for a recover for Felice Tiene and Jordon Lennox-Lamb also aiming at the podium. Good performance awaited from Alex Palou. Marcu Dionisios to defend CRG colors in KF Junior.

Lonato del Garda (Brescia). CRG works team is ready for a red-hot challenge. This time the fight will be for the European KF Championship in the second and last round of the season that will also include the category KF Junior. The International Circuit of Abruzzo in Ortona (Chieti, Italy) will stage this round and it will be new to all drivers that did not take part in the Under 18 World Championship and Academy Trophy back in 2011.

AIMING FOR THE TITLE IN KF. Max Verstappen (CRG-Tm) – this year really insatiable after winning the KZ European Championship, the WSK Euro Series KZ1 and WSK Master Series KZ2 –  will have the chance to fight for the title once again. In the European CIK-FIA Verstappen is currently third in the standings with 16 points after the first round of Alcaniz in Spain. He follows Nielsen who scored 25 points and Sorensen who stands at 20. Verstappen won the Pre-Final and obtained the third place in the Final due to a little technical yield problem to his engine that was fixed during the race.

The Dutch driver has good chances though, but alsoanother CRG driver can move a serious attack to the lead and put his name forward to get the championship: Felice Tiene on CRG-Parilla is in fact in very good shape in this second half of the season and is quite motivated to move the final attack to the championship. Tiene was the fastest in Alcaniz's Final putting in a spectacular recover from the 30th place to the 5th. He currently has 11 points and he still can do it.

Jordon Lennox-Lamb (CRG-Bmb) is out of the title games, but is certainly ready to get on the podium after the bad luck experienced in Alcaniz where he had to stop in the Final due to the chain failure. The Spaniard Alex Palou(CRG-Parilla), 14th in Alcaniz scoring 2 points is called to a strong race keeping the momentum going of his growth after the success in last year's KF3.

DIONISIOS  TO COMPETE IN KF JUNIOR. Marcu Dionisios (CRG-Bmb) will wear CRG official colors in KF Junior. He produced a good race in Alcaniz with the 16th position in the Final at the end of a troubled weekend. This race will be important for Dionisios to shine as he deserves.

CRG'S WORKS TEAM
IN THE EUROPEAN KF&KFJ CHAMPIONSHIP OF ORTONA:

TV COVERAGE. Ortona's European races to be run next Sunday 21 July will be available through web LIVE STREAMING on the internet at www.cikfia.tv and www.cikfiachampionship.com. RAI Sport2 will show the races recorded on Wednesday 23 July and a special on this round will go on air on Friday 26 July.