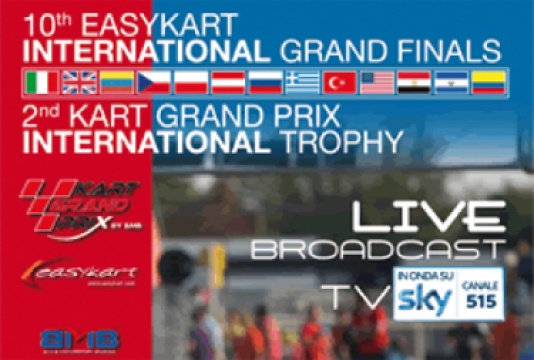 
Twenty countries will be represented at the annual event, regarded as the Easykart World Championship, with Italy the host nation fielding a squad composed of regional, national and international champions. Not to be outdone, the British team is again packed with an exciting array of talent and experience.

Provisional Cadet Champion Sam Faulkner heads a seven-strong line-up. Faulkner made his debut last year, alongside Jordan Sanders, at the same circuit. It proved to be a tough learning curve, but both acquitted themselves admirably and will almost certainly use their previous experience to challenge at the sharp end this time around. Completing the Cadet line-up are brother and sister Ethan and Esmee Hawkey, Matthew Taylor, Jason Gavagan and double race-winner Jenson Murchison.

In the pouring rain last year, Toby  Sowery underlined his ability with a creditable 4th place overall. The Junior Champion wants a podium this time and is joined by fellow returnees Ronan McKenzie, Zack Nickson, Will Stowell and Tom Thickpenny. Bar Sowery, they were all Cadets last year - but all have stepped up to the Junior class in fine style, and they will all be out to impress the Birel management team that they are not only worthy of their Easykart Driver Program places but also a berth in the Birel factory KF3 team. First-timers Jay Hudman, William Jeavons, Jay Lay, Willis Mayneord, Jack New and Ben Nicolls complete the line-up.  If he races as well he has at home in Britain, Lay could well be the stand-out debutant in this category.

In one of the closest and hardest-fought classes, Light, all our drivers made it through to the 2009 final. Of that particular group of drivers Sam Dimelow and Jamie Crease are back for another go. Last year Dimelow thrilled on his way to an eventual 4th but his preparations for next weekend have been hampered by a dislocated elbow. Not that a minor thing such as that would deter, or even slow him down. UK Champion Ayrton Hirst will be one to watch, as will the mercurial Joe Paterson. Crease will be able to draw on his previous experience, but for Brad Fairhurst, Tim Gibson, Luca Hirst, Grant Hunter, Patrick Lay, Jamie Summerhayes and Ben Yeomans, Castelletto will be an entirely new experience. However, don’t expect that to prevent them from putting in some quality performances.

Before he switches to the Light category for 2012, Barnaby Pittingale is aiming to cap another brilliant season by adding this year’s world crown to the one he claimed so convincingly at Cervia in 2007, and his European title. Pushing him hard will be vice-European Champion Gary Poynter, who will be out to avenge a disappointing domestic campaign and this year’s UK Championship runner-up, William Smith.

Flying Scotsmen Mark Lawrence and Jack Bruce entertained at Castelletto last year and will surely do so again. If the bad luck that dogged the start to his UK challenge does not return, expect Lawrence to be seriously quick. Damien Hodge returns for to the World Finals for a second time whilst Peter Bunton and ‘Great Dane’, Stig Elboth make their international bows.

The event gets underway on Friday (14 October) with timed qualifying, followed by heats on Saturday and the Grand Finals on Sunday. If you’re looking for a fast, friendly series where the emphasis is on driver ability rather than budget, you’ll love Easykart. Visit www.easykart.co.uk for more information.