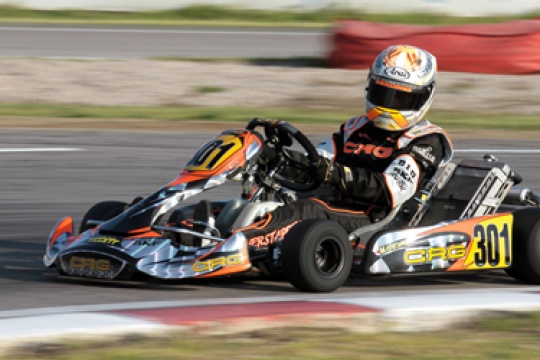 CRG official team will participate in the race on the PF International Circuit of Brandon. Max Verstappen is undoubtedly the driver to beat in KF3.


Lonato del Garda (Brescia - Italy). The first event of the 2011 CIK-FIA International Championship is taking place this weekend, from 28th April to 1st May. A double event for the KF2 and KF3 categories in the new trophies: North and South Europe. The venues of the two trophies are in Brandon (Great Britain) for the Northern Europe trophy, and Varennes-sur-Allier (France) for the Southern Europe trophy. Both the races are valid as qualification to the final of the European Championship of Zuera.

CRG Official Team is taking part in the British event which has drivers coming from Great Britain, Ireland, Poland, Czech Republic, Slovakia, Belgium, the Netherlands, Scandinavia, Russia, Baltic and extra European countries.
On the “PF International” circuit of Brandon, CRG is fielding its top driver, Max Verstappen (in the picture). At his side the other young and promising Dutch driver Max Koebelt and the Chinese from Honk Kong Jacky Chan Cheuk Hin, besides Stan Pex of CRG Holland, Max Defoumy and Maxime Carpena of CRG Junior Team.
In KF2, the official drivers for the Italian constructor are the Danish Michelle Gatting and the Russian Ivan Nikichenko, together with the two Belgian drivers of CRG Junior Team Junior Team Julien Lefort and Corentin Gilson.
On the other hand, on the track of Varennes-sur-Allier, in the race reserved to the drivers coming from Southern Europe, CRG will be represented by drivers racing for private teams.
The two 2011 European Trophies, besides assigning the CIK-FIA title to the winners, will qualify the 180 drivers (90 for each category) who will participate in the European Championship Final due next 24th July in Zuera (Spain).