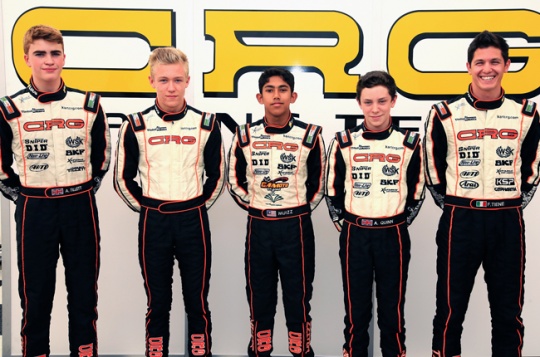 Press Release by: CRG
The second round of the European KF and KF Junior Championship will take place in England at the Circuit PFI of Brandon. Among the favourites of KF Felice Tiene, who is currently third in the standings. Hitbrand back on track after skipping the round of Portimao.
This coming weekend CRG works team will be facing the second round of the European CIK-FIA KF and KF Junior championships at the Circuit PFI of Brandon (England). This is going to be an important round for the classification and for the potential of CRG drivers that will be aiming to prestigious results.

KF CRG SQUAD LED BY FELICE TIENE
The round at the PF International Kart Circuit follows the first event of the European KF and KF Junior championships held in Portimao last 10 May. Felice Tiene obtained an excellent result behind the wheel of the CRG Gem Star chassis, as he was third in the Final after a series of brilliant results in the qualifying stages and the second place after the heats, which earned him further 9 points to be added to the 16 harvested in the Final. Thanks to the result scored in Portimao, Tiene will get to the Circuit PFI as third in the championship, all set to climb the ladder.
The quick Spanish driver Pedro Hiltbrand, will also be back on track with CRG in England after being forced out of the first round due to a physical problem, but now he is ready to place himself among the main protagonists of the championship.
At PFI an eye will have to be kept on the Belgian driver Benjamin Lessennes in KF. He replaced Hiltbrand in Portimao and now is back with CRG works team. Lessennes comes from a good result obtained last Sunday in Genk's round of the German Championship, as Hannes Janker of team TB Motorsport, who dominated the race of Genk and was fourth in the Final in Portimao. Among the favourites in England, the Dutch Martijn Van Leeuwen of team CRG Keijzer Racing, who has constantly been among the quickest and took fifth in the first round of Portimao.
The young Briton Archie Tillett will also compete for CRG and is well motivated to show his value on the home track.

QUINN AND MUIZZUDDIN IN KFJ
CRG works team for KF Junior will feature again the British driver Alex Quinn on CRG KT2 chassis, who put in two great comeback races in Portimao ended with P9. In England, alongside Quinn will compete the Malaysian driver Muizzuddin, who was forced to retire from the first round of Portimao due to a technical problem in the second chance race.


ON THE VIDEO
Sunday 21 June The Live Streaming feed will be available on the websites cikfia.tv and cikfiachampionship.com. A special on the race will be shown next week on Motors TV.