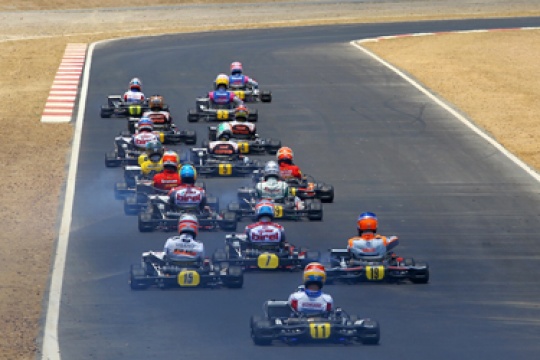 Kosmic Racing Department Team is ready for the Winter Cup’s seasonal debut, traditional beginning of any starting season. Our Team, with the past year full of success, two titles gained in the WSK World Series, in SKF and KF2 category and in the WSK Euro Series, is going to introduce drivers for its 2011 line-up, complete in any category. Our drivers will have at their disposal winning material, Lynx and Mercury chassis which proved already to be highly competitive, reliable and versatile. The synergy will be completed with Vortex engines, RAD model for KF category and RVXX for KZ category. Vortex engines have been the real ace in the hole for any 2010 success and sure will also be the same for the year 2011, representing the technical power for our Kosmic Kart Racing Department.

KZ1 – In the class with the shift the two-times WSK champion Armand Convers will race in the whole season with a schedule including both CIK competitions, with the World Cup and WSK Euro Series ones, with the Final Cup and the Champions Cup.

KF1 – WSK World Series 2010 Champion, Sébastien Bailly, another driver of our Team, will have his debut in the KF1 category. Besides the Belgian driver, there are two drivers just arrived, the fast Zdenek Groman and Tereza Gromanova. Czech drivers already have a rich International experience in the field and with Bailly they will set up a group of three very competitive drivers.

KF2 – Four drivers wearing our colours in the KF2 category, all of them new arrivals, beginning from the Italian Nicola Marcon and Paolo Ippolito, both Internationally experienced. It will be the first time for the Argentinean Pablo Nicolas Maranzana and the Malaysian Tan Wei Ron, so year 2011 will represent an important test bed for them..

KF3 – Second year with us, Pedro Hiltbrand, the good Spanish driver will fulfill his potential, resulting from the job made on last season. Indeed in 2010 he achieved important placing, such as his WSK Euro Series’ podium.

Alice Brasseur will compete during the whole season wearing Kosmic Kart-Vortex colours, after having raced some competitions, at the end of 2010, with our official Team.

“I think the year 2010 was very positive for us, we won a lot of times and laid the foundations to go on this way and still have with us the titles’ winners, Convers and Bailly.Important drivers have joined our Team, giving power to our potential, both in KF1 and KF2 categories. In KF3 class Hiltbrand and Brasseur will have one more year of experience on their shoulders, which is very important for any young driver. What is up to us, is to be able to provide them with the best material for any situation.I am also positive concerning our technical material, which I think is high-quality, thus giving the Team a strong work enthusiasm.”