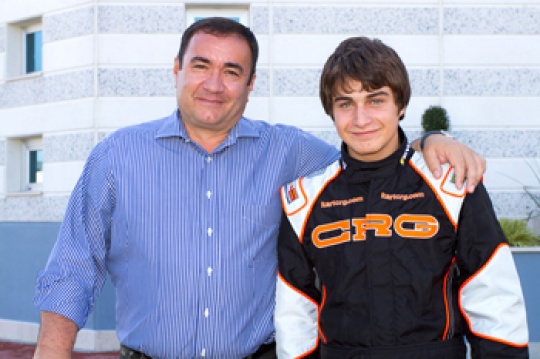 Crg announces the arrival of Mirko Torsellini in the CRG-Maxter official team. He will race in KZ2 in the Wsk World Euro Series, in the European Championship and in the World Cup. His debut by the end of october in the World Series in Egypt

CRG-Maxter official team continues its important sports project dedicated to the young drivers. Mirko Torsellini (in the picture above with Giancarlo Tinini, CRG Spa chairman) has just joined the team which is being prepared for the 2011 season. The seventeen year old driver from Siena has already a noticeable national and international sports experience , despite his young age.
Mirko Torsellini has been racing in karting for more than ten years; he can boast experiences in car racing too (in Formula Azzurra and in Formula Abarth in 2010).
Last year, while getting experienced in car racing, he kept on with his activities in karting, taking part in the KZ2 European Championship, in the WSK International Series and in the Open Masters Italian Championship. He eventually succeeded in winning, thanks to the CRG chassis of the Team Elto Racing, the International Siena Trophy in KZ2 at the end of the season. This year his engagement in Formula Abarth did not allow Mirko to have a proper sports programme in karting, but he has now changed his mind and wants to get back to a full time commitment in karting. That is the reason why of the agreement with CRG, first rate firm at world level in karting, for a top level international programme
Mirko Torsellini’s 2011 schedule for CRG-Maxter provides his participation in the WSK World Series and the WSK Euro Series, in the European Championship CIK-FIA and in the World Cup, always in the KZ2 category. Anyway, Mirko is already working for his official debut as CRG official driver: the young driver from Siena, in fact, will take part with the colours of the “all black” team in the third event of the WSK World Series in Egypt, next 31st October. Then on 28th November he is taking part in the race of the WSK Nations Cup of Muro Leccese. 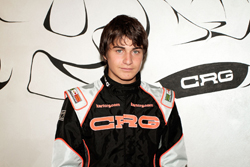 Mirko Torsellini was born on 29th July 1993 and lives in Castelnuovo Berardenga near Siena. He started racing in karting when he was 7 on the track owned by his family. In the 60 Mini he won twelve times taking part in three Italian Championship. In 2005, in the 100 Junior, he won the Tuscan Regional Championship. His debut in KF3 dates back to 2007. He took part in several national and international races with good results. He continued racing in KF3 in 2008 too. At the end of the season he started racing in KZ2. Always in 2008 he took part in the course of the Federal School CSAI of Vallelunga, passing the test driving a Formula Azzurra and a Formula Renault. In 2009 he had to deal with his double engagement in karting and car racing. In karting he participated in the KZ2 season with the new LH-Lewis Hamilton chassis. At the end of the season he won the international trophy of Siena. In Formula Azzurra he got excellent results (pole position and two third places in Vallelunga, besides a second place in Varano). In 2010 his debut in Formula Abarth with a new open wheel car which allowed him to get noticeable speed results , both during the practice and the races.