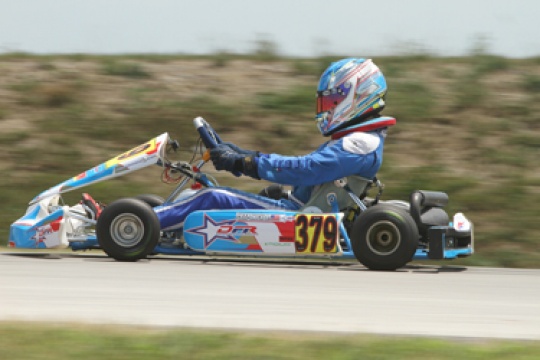 Miami, FL – Rotax Max Junior sensation Dore Chaponick Junior has completed one of his major goals of the 2010 season, to qualify for the Rotax Max Challenge Grand Finals as part of Team America. Competing in the Rotax Pan American Challenge, Chaponick cruised to a stellar vice-championship finish in the overall point standings for the Rotax Junior class and in doing so, qualified for the World Final event, held this year in Muro Lecesse, Italy.

“It feels great to be a part of Rotax Team America,” quoted Dore Chaponick Jr. following the event in California. “We were so close at the US Grand Nationals, but to come back and finish second in the Pan Am, that is awesome.”

The final round of the Rotax Pan Am was held at the CalSpeed Karting Center in California. Competing aboard his usual DFR Racing Alonso Kart powered by Supertune Engines Chaponick found himself near the top of the timesheets all weekend long.

Saturday started off with a fourth place qualifying effort for Chaponick at CalSpeed, only fractions of a second away from the pole-position. However his pre-final didn’t go quite as planned. A ripped fuel line let go on lap five while battling for the lead, resulted in a DNF for the young Chaponick, relegating him to the bottom of results and a last place starting position for the final.

But as usual, Chaponick put the issue aside and drove one of the best races of his career in the final. Starting all the way back in fifteenth, Chaponick battled throughout the entire race, including some very risky passes and off track excursions to charge back to fifth place.

“It was a wild race,” smiled Chaponick from his Miami, Florida area home. “I was very fast, but so was everyone else. I just had to keep my nose clean and work my way forward and I did just that.”

On Sunday Chaponick set himself up front from the get-go. Qualifying in second place, less than a tenth of a second behind the polesitter, he then jumped out front early in the pre-final before cruising to the heat victory. Starting on the pole-position for the final, Chaponick led the early stages of the race. However he fell down to fourth place near the midpoint and could only manage to finish the race in third after some rough driving by a competitor held him back from battling for the win.

“Although I didn’t win the race, it still feels good to finish second in the championship and earn the invitation to the World Finals. I’m very excited to take on the world.”

Dore will now use the next six weeks to prepare for the Rotax Max Challenge Grand Finals, which will be held at the world famous La Conca Karting facility in Italy on November 16 to 21.

Dore Chaponick Jr. is currently 13 years old and competes for the DFR Racing Team. He is supported by: Quality Air Contractors, Tax Management Services, Supertune Engines, Autosports Media Group as well as his Mother and Father in pursuit of a professional racing career. Dore was the 2008 Florida Winter Tour Mini Max Champion.

For more information about Dore Chaponick, visit his website http://dorechaponick.com