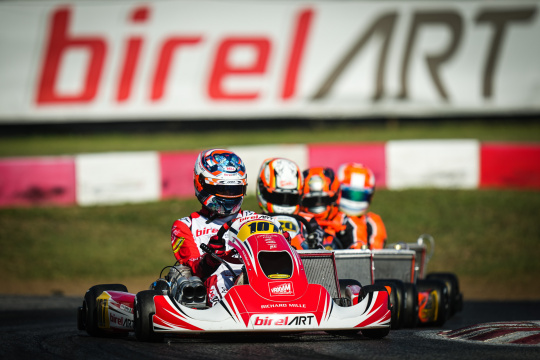 Press Release by: Birel ART
The WSK Open Cup is a competition that the Birel ART Racing Team has often won. The Birel ART karts never lack performance on the demanding circuit of Lonato and the 2022 edition was no exception to the rule.
Giuseppe Palomba, the top representative of his team, achieved a brilliant 2nd place in KZ2, while Kirill Kutskov made a remarkable debut in OK with his Birel ART-TM.
The prestige of the WSK Promotion events is still in effect! All the teams involved have worked hard to enable their drivers to mount the podium in this challenging context, and the Birel ART team was able to demonstrate the competitiveness of its equipment once again. "The team was very happy to celebrate another top three at the international level," said team manager Riccardo Longhi. "Organised at the end of the season, this WSK Open Cup is interesting because it allows young drivers to move up to the top category. We also took the opportunity to test new and promising technical solutions for the 2023 season. There are many positive elements to take away from this meeting."

Palomba in the fight for victory in KZ2

Several major international teams were racing at South Garda Karting, adding interest to the event. Giuseppe Palomba and Cristian Bertuca set excellent times in Free Practice, before facing rainy conditions for the official timed session on Friday. Palomba was fastest in the team with 4th place, and then went from strength to strength: 2nd in the Qualifying Heats, victory in the Prefinal and a brilliant 2nd place in the Final after several laps in the lead. While he was well placed in the Prefinal following a retirement in a heat, Bertuca was again unlucky in the Final as he had to retire at the beginning of the race.

Kirill Kutskov already among the fastest in OK

Kirill Kutskov, who made many great moves in OK-Junior in 2022, took his first steps in the OK category. The young Russian was delighted to discover this new environment, with softer tyres, particularly powerful engines and a more complex carburation to manage. The Birel ART team was able to support its driver in this new challenge. Making constant progress in the heats, he was 9th in the Prefinal and then 7th in the Final, while posting excellent lap times.

Jindrich Pesl had difficulties in the rain on Friday, but then showed a very high level of performance in OK-Junior. Unfortunately, the delay in Qualifying, added to a retirement in the Super Heat, did not allow him to show his talent on Sunday. But there is no doubt that the driver from the Czech Republic will be able to react quickly.