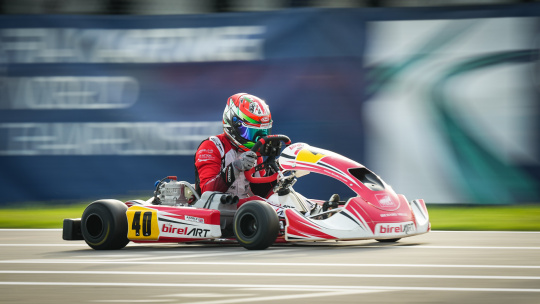 Press Release by: Birel ART
After two very convincing days of testing on Thursday and Friday for Birel ART, the rain arrived and overshadowed the Timed Qualifying. In the World Championship, the Italian team's drivers were unable to match their performance levels and had to fight their way back up the field during the Qualifying phase.
The 42 positions gained by Harley Keeble in OK and the 66 places gained by Kirill Kutskov in OK-Junior allowed Birel ART to finish this difficult World Championship at the foot of Vesuvius in style, with excellent lap times!

The highest level of international karting sometimes holds some nasty surprises and the Birel ART team was far from having a peaceful meeting for its trip to the Naples region. "We know the strong potential of our Birel ART-TM Racing packages and we arrived in Naples with legitimate ambitions," admitted team manager Riccardo Longhi. "But on Friday, after the Qualifying results were published, it was obviously a disappointment to see our drivers in places that we had hoped would be much better after Free Practice. However, after a heavy shower, the racing lines started to dry out during the official sessions and the drivers' role was not easy in these conditions. However, we are prepared to face such circumstances. Of course, the team will analyse this and try to understand why the results on Friday were so far from our expectations. Despite this, the team stayed together and we were pleased to see a high level of performance from a number of our drivers, which led to some great comebacks on Saturday and Sunday. We didn't get the overall result we were hoping for, but we had confirmation of the excellent performance of the new 2023 chassis."

Kirill Kutskov did not spare any effort to reach the Final in OK-Junior. The young Russian driver sometimes gained almost 20 places in the heats with a very fast pace. His progression ended with a convincing 23rd place, even though he had only been 89th in Timed Qualifying! Swiss driver Kilian Josseron put in consistent runs with two top six finishes and was rewarded with a place in the Final. Dutch driver Reno Francot was able to finish in the top five in the heats and was fast in Sarno. As for Jindrich Pesl, he was 9th in his first heat, before frequently missing out on success.

While Italian Cristian Bertuca was only a few points short of the OK Final, Harley Keeble gained places in each of his heats to make it into the group of 36 finalists. In the Final he was extremely competitive with the leaders, before retiring with two laps to go.

The Birel ART factory would like to congratulate the Leclerc by Lennox Racing team for its performance in Sarno and in particular the magnificent Final for Gerasim Skulanov in OK-Junior. Already winner of two heats in Qualifying, he finished 3rd at the chequered flag at the wheel of his Birel ART-TM Racing, he unfortunately lost his hard-won podium due to a penalty (fairing position).