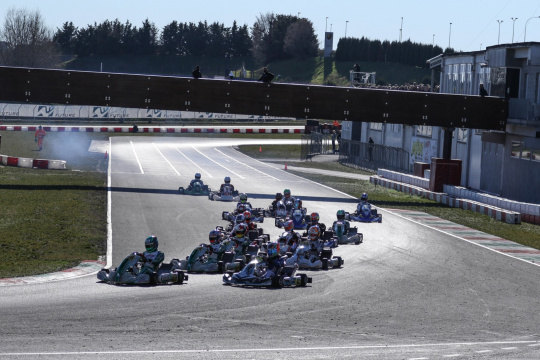 Author: Vroomkart International
The show was not lacking on Saturday at Franciacorta, all the heats concluded for the categories present. Pole positions confirmed in the Presa Diretta, twists and turns in KZ2.
An eventful Saturday in the first "Champions Of The Future" competition of the season. European tests, as we said on the eve, which begin to breathe the paddock that will be the brawl of the coming months. The day was also marked by some "spectacular" race incidents, especially in the morning OK and OKJ.

Anatoly Khavalkin continues his race leading the Junior from the top. Author of yesterday's pole position, the Russian driver was impeccable today, bringing home three heats out of three, conducted and concluded in an authoritative manner. It will be the Parolin driver who will lead the first of tomorrow's two SuperHeats from pole position. A strong response from Birel Art with Kirill Kutskov, regular in the results with a third, a fourth and a first place that give him the start from the first position for the second SuperHeat. Jan Przyrowski and Aleksandr Bondarev in third and fourth place in the provisional general classification are also to be watched. Two crashes and consequent red flags led by Miguel Costa and Ghazi Motlekar in the morning and Maxens Verbrugge in the early afternoon.

Clear path also for Tomass Stolcermanis in Senior, able to maximize the great performance already obtained yesterday. Tuukka Taponen leads the Tony Kart group with the pole position for the second SuperHeat, Finnish followed by the OKJ World Champion, Kean Berta-Nakamura. Fourth place overall confirmed for Alex Powell, Joe Turney closes the provisional top five. Also in this case, an incident to be reported with Arvid Lindblad out of the race already in the first heat of the morning after a spin in the early stages of the race.

In the KZ2 Birel Art - Tony Kart clash, for now it is Simo Puhakka who is still leading operations. The Finnish driver has proved to be at his best on this circuit, winning all the available heats. Specular path for Giuseppe Palomba, betrayed in the last heat (when he was in the lead) by a technical problem and forced to give up the pole position. First position in tomorrow's second SuperHeat in the hands of Laursen Van Hoepen (Lennox Racing), provisional third place for Noah Milell.

SuperHeat scheduled tomorrow morning from 10.30 am