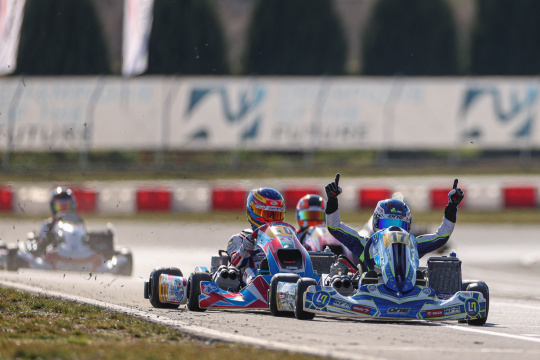 Author: Vroomkart International
Grand finale for the RGMMC Winter Series on the Franciacorta kart track. Simo Puhakka (KZ2), Tomass Stolcermanis (OK) and Maciej Gladysz (OKJ) win their respective finals.
A spring Sunday launches RGMMC towards the new start of the season on the circuit, defined by the paddock as a watershed for the fate of the next OK and OKJ European Championship. A brilliantly passed test in terms of spectacle and great unknowns for the FIA Karting season which is closer than ever.

It was the OKJ to open the dances after the two SuperHeats in the morning, due to the delay on the original programme, for two other race incidents and a red flag shown. We will talk about these episodes in more detail about the category and the drivers in the near future. Moving on to the very final, everything was decided in the final laps after a great three-way tussle up to five laps from the end, led by Anatoly Khavalkin (also pole man in the final), Kirill Kutskov for Birel Art and the "new entry" from the upper echelons, Andres Cardenas. Just a few laps from the end, it was Kutskov who broke the bank with a perhaps risky manoeuvre on Khavalkin and the consequent race contact which, in fact, cut the Russian out of the fight for victory, slipping to fifth place. The duel was reshuffled by the contact and was able to bring the winner of the FIA Academy Trophy, Maciej Gladysz, back into the fray after starting in tenth position. The Polish driver soon put his signature on an "overtaking victory" over Cardenas as he took the lead at the last hairpin bend before the Franciacorta straight. A masterful overtaking move that placed Gladysz in the hands of the Winter Series Champions Of The Future. Second place for Andres Cardenas, visibly disappointed on the podium but still the protagonist of the weekend, third Anatoly Khavalkin after the decision of the commissioners against Kutskov, punished with a 15sec penalty for incorrect maneuver and for causing an accident.

Not much to say for the OK Senior final except for the loud and clear name of Tomass Stolcermanis. The Latvian of Energy Corse, already Rotax Champion, has entered by right the list of the possible protagonists of the European Championship. It is worth highlighting Stolcermanis' authoritativeness in leading the final and the whole weekend, never dropping from the first position. Five and a half seconds inflicted on the competition, represented by Matheus Ferreira in second place and the OKJ World Champion, Kean Nakamura-Berta. Also in this case, the podium was only changed after its actual celebration, with the penalty imposed on Joe Turney of 10sec for overtaking under a yellow flag, the cause of his 13th position and not second.

Great confirmation also in KZ2 with a Simo Puhakka in splendid form and master of the weekend. The Finnish driver managed at best the start and then tried to gain a margin, without getting away too much, thanks to the excellent race pace of Giuseppe Palomba, second at the finish line with David Liwinski immediately behind him. Top five closed by Van Hoepen and Paolo Ippolito.