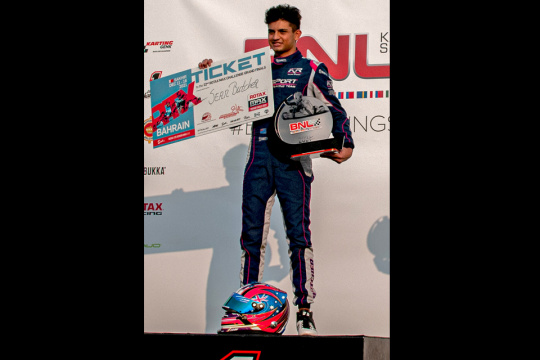 Author: Vroomkart International
After a dominant performance at the “Home of Champions,” Karting Genk at the BNL Karting Series finale this past weekend, KR-Sport’s Sean Butcher wrapped up a successful defence of the Senior Rotax title (by Alex Goldschmidt - Pictures Of Things Going Quick)
The #301 took a perfect score at the 1,360-metre circuit based in the Limburg region of Belgium, consolidating a total of 192 points, 34 points in front of this year’s runner-up, his UAE-based team mate Lachlan Robinson.

We caught up with him soon after he was presented with his championship trophy and ticket to represent Team UK at this year’s Rotax MAX Challenge Grand Finals this December in Bahrain.

Sean, firstly, congratulations on successfully defending your title in the BNL. Can you give us an idea of your first emotions when you came out of the final corner of the last race to know you’d done it?
Thank you! Yeah, it was an amazing feeling, but what emphasised it was how hard the team and I have been working throughout the season with many highs and a few lows.
It was undoubtedly a dominant weekend for us, the package was untouchable, and it made it much easier throughout the weekend, knowing I have the pace to win if I get in the right zone.
And in every race, we did exactly that, but the final was special as that’s how not only we won the championship but also go into next season in style, and I’m really grateful for how good everything was.

You’ll be representing Team UK at the Grand Finals in Bahrain this December. What does this mean to you as a driver?
It’s a great privilege to be able to represent Team UK at the Grand Finals, this will be my first time due to last year’s event being cancelled and I’m still not quite sure what to expect!
But it’s an amazing feeling knowing that you’re one of the few drivers that get this opportunity and I’ll hopefully be able to get some good results there.

The BNL Karting Series has had some great drivers come through its ranks including yourself. What aspects of the championship really help make it an enjoyable experience to race at?
The BNL Series has got to be my one of my favourite championships alongside the Euro Trophy, mainly because of the great tracks that we visit. Genk is certainly not just mine but a lot of drivers’ and teams’ favourite track because of the changing track conditions and also the facilities.
The way the championship is run is fantastic and I’m a big fan of the double header weekend formation at selected rounds. I’m grateful to be their Senior Champion for another year!