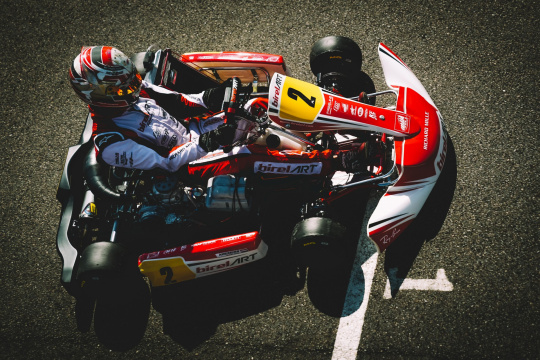 Press Release by: Birel ART
Whether in the official Birel ART Racing Team or in the Leclerc by Lennox Racing Team, the Birel ART chassis confirmed their excellent competitiveness in Kristianstad.
In spite of the extraordinary circumstances that forced several top drivers out of the race, Viktor Gustafsson was able to reach 4th place in the KZ World Championship, while Alessio Piccini crossed the finish line of the KZ2 International Super Cup in 5th position.

Riccardo Longhi Team Manager and KZ driver Birel ART Racing:
"On the Kristianstad circuit, which we use less than other European tracks, and in much cooler temperatures than in the last few races, it was not easy to set up the equipment with the MG tyres. I must admit that it went better for the Leclerc by Lennox Racing team than for us. Pedro Hiltbrand and Matteo Vigano were very fast and they were able to aim for the KZ title. After Hiltbrand's retirement, Vigano won all the heats, but he had to retire at the start of the Final. The tyre management did not allow the official team drivers to perform as well. Marijn and I didn't do well in Qualifying, but we managed to make up some ground in the Final, which is never easy in KZ at this level, and we both finished in the top 10. Giuseppe Palomba and Alessio Piccini had good times and solid runs in KZ2. Giuseppe was slower in the Final and retired after a collision that damaged his chassis, but Alessio had a great race, moving up eight places to 5th under the chequered flag. It's a pity that a penalty for an unhooked spoiler put him back to 9th. It wasn't our weekend, but the chassis performance was there.

FIA Karting International Super Cup - KZ2 - 91 participants
Alessio Piccini: 9th in Qualifying, 5th at the finish of the Final (+8pl), ranked 9th after penalty
Giuseppe Palomba: 6th in Qualifying, 6th in the heats, retired in the Final, 8th with three laps to go