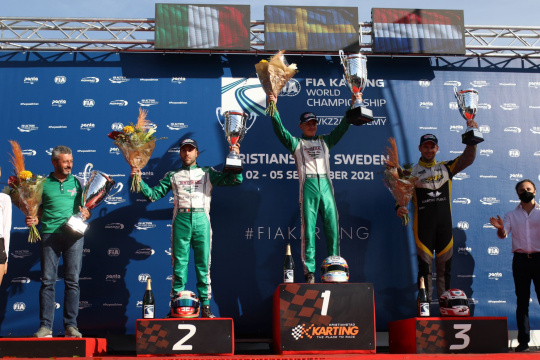 Author: Vroomkart International
The weekend of the FIA World Karting Championship crowned the new champions. Noah Milell (KZ) and Lorenzo Travisanutto (KZ2) triumphed in Sweden.
A weekend which, as usual, will go down in the annals of this sport. A great spectacle which closes the FIA season of the gearbox classes by electing two new Champions, as a proof of the generational change.

KZ - Noah Milell King at home
The KZ World Final held everyone in suspense since the early hours of this morning. With the last heat won again by Matteo Viganò (Lennox Racing), the Italian was able to get his second pole in two races in a row ahead of the host Noah Milell (Tony Kart). Just the Swede at the turning off of the lights has guessed the perfect start burning opponents on time, a move that will prove decisive a few corners later. Twist and "dramatic" sporting moment for Matteo Viganò stopped by a technical problem in the middle of the first lap. An undeserved misfortune for the Italian, who had been dominant all weekend and was widely in contention for the title of World Champion. Having taken the lead right from the first corner, Noah Milell waved goodbye to the competition and literally ran towards success, building up an advantage lap after lap. Hellish pace for everyone starting from his team mate Lorenzo Camplese (Tony Kart) who was firmly in second place for the whole race ahead of Viktor Gustavsson (Lennox Racing) and Jorrit Pex (SP Racing). Just the Dutch driver gave one of the last emotions of the race by overtaking Gustavsson and getting the third position on the podium. At the end of the 25 laps in programme, in front of his own public and for the first time in his history as Swedish driver, Noah Millel crossed the finishing line in tears as new World Champion. Tony Kart one-two completed by Camplese, third Pex ahead of Gustavsson and Puhakka. Solid weekend for Fabian Federer (SRP Racing) in sixth position after having occupied the podium zone for a long time, seventh Paolo Ippolito (CRG). The top ten is completed by Stan Pex (SP Racing), Marijn Kremers and Riccardo Longhi (Birel Art), both recovering. 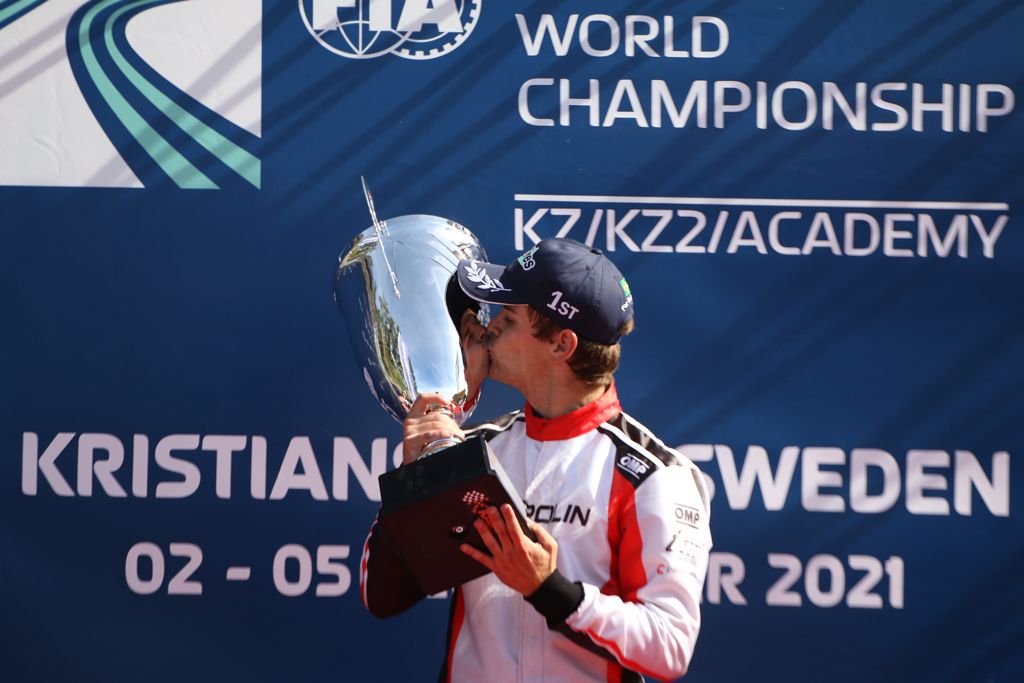 KZ2 - Lorenzo the Magnificent, again
In October 2019, Vroom titled this after Lorenzo Travisanutto's victory at the OK World Championship in Alaharma (Finland). After two years and a major change from Presa Diretta to KZ2 the story has not changed, the Italian is still in the Olympus of karting thanks to the title of International Super Cup KZ2 Champion. A formidable weekend for the Parolin driver started from the group pole position, continued with the pole position for the final thanks to three wins out of five heats and completed by a capital race. After the start, Travisanutto was able to keep the lead without being intimidated by the attacks behind him, then managing to maintain a good gap throughout the race. Pure struggle behind the Italian between David Trefilov (SRP Racing) author of a lunge at the leader then finished long at the last corner, Samuel Luyet (Tony Kart) and Senna Van Walstijn (CPB). Almost triumphal ride for the Dutch driver started from P11 after a heavy withdrawal during the heats but constantly clinging to the desire for revenge. There was a twist ten laps from the end with the incredulous Swiss Luyet out of the race due to a technical problem while he was in second place, so there was room for Van Walstijn and Trefilov to take the silver and bronze medals. With over two seconds of advantage at the end of 25 laps, Lorenzo Travisanutto has therefore crossed the finish line as a new champion after the first podium KZ2 obtained just a few weeks ago in that of Adria. Still a second place for Van Walstijn, third Trefilov, complete the top five Jean Luyet (Tony Kart) and James Wharton (Parolin). 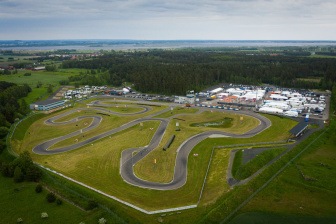