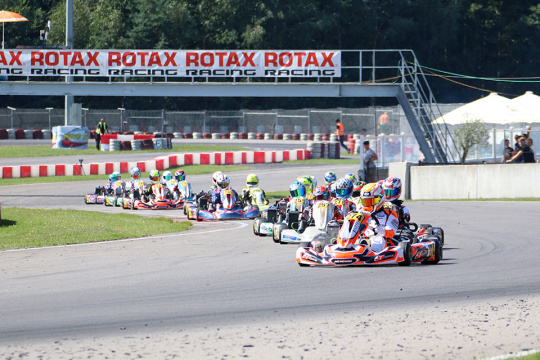 Author: Vroomkart International
ROTAX MAX CHALLENGE EURO TROPHY - Wackersdorf, Germany, Round 4 (Text Jen Wade & Photos ©Timo Deck/MotorsportXL)
The season final brought the Rotax MAX Challenge Euro Trophy four-round series to a climax over the weekend at Wackersdorf in Germany with the much-anticipated showdown to decide the 2021 champions and place-getters, as well as the qualified Euro drivers for the prestigious RMC Grand Finals in Bahrain this December. It was also the final edition of the Rotax Euro eKart series. Perfect weather for racing and the 1,190 metre Prokart Raceland circuit was ideal for the competition finale.

The celebration of the RMCET 2021 champions took place without spectators once again this year, although the series was at least able to be completed. Already confirmed from round 3, Callum Bradshaw (Senior MAX) and Paul Louveau (DD2 Masters) were both awarded their trophies and their RMCGF tickets. Following the very last races in each class, it was the defending champion Kai Rillaerts (Junior MAX), Petr Bezel (DD2) and Hannes Morin (Rotax Project E20) who prevailed. The highly competitive international field from 23 countries continued to impress with the strong level of racing in the Rotax categories, with close and intense battles to the flag in all of Sunday’s finals.

JUNIOR MAX
At the conclusion of the heats Saturday afternoon, it was last year’s winner and the pole-sitter Kai Rillaerts (NED) who topped the rankings with one race victory, equal on points with his JJ Racing teammate Farin Megger (GER) in P2, then Matthijs Terlouw (NED) and Mikkel Pederson (DEN) to share the front row in Final 1. With more than a handful of leaders aiming to take the victory in the morning race Sunday, the honours went to Matthijs Terlouw (NED) after Kai Rillaerts pushed to cross the line 0.005 seconds ahead, yet dropped to P9 following a front-fairing penalty. Farin Megger (GER) was 2nd ahead of heat 2 winner Raphael Rennhofer (GER). Rennhofer got away in Final 2 for a clear victory and Megger in P2 ahead of Pederson. The overall result saw Raphael Rennhofer (FM Racing - Tony kart) win the last round Megger (JJ Racing - Exprit) and Matthijs Terlouw (Tony Kart).

SENIOR MAX
With six heat races on Saturday, former champion Mathilda Olsson (SWE) won three while her teammate Callum Bradshaw (GBR) took two wins. Top qualifier Sean Butcher (GBR) ranked P3 over Alexander Abkhazava (GEO) and the other heat was won by Rashed Ghanem (UAE). Making her only RMCET appearance this year, Olsson showed her speed in Final 1, as Bradshaw and Butcher diced for 2nd, the Tony Kart official driver winning that battle, with Lewis Gilbert (GBR) moving up to P3.
Final 2 was not so easy, the Swede losing her lead when Bradshaw led the charge. Relentless in her reply, Olsson regained positions to hunt Bradshaw, while the anticipated battle for championship placings was well underway behind. Mark Kimber’s poor qualifying left him midfield, but he climbed back up into contention for a series podium. It was 18 tough laps, not only for the leaders, with Bradshaw too strong and the former title-holder in 2nd, fastest in both finals. Gilbert prevented an all-Strawberry top 3 ahead of a close finish between Kimber and Robinson. Bradshaw won the round with the Final 2 victory from Olsson in 2nd on equal points and Gilbert 3rd.

In the deciding tally, the RMCGF 2021 tickets were awarded to Callum Bradshaw as the champion, runner-up Mark Kimber and Lachlan Robinson, securing his invitation by a few points from Butcher.

ROTAX DD2
From the beginning of the weekend there was a good mix of DD2 drivers on the pace and likely to be up there come Sunday. However, Estonia’s Ragnar Veerus dominated the event from the qualifying practice, winning every race over the weekend and boosting himself to third in the championship. Title contender Ville Viiliaeinen (FIN) secured his place on the front row in Final 1 following the heats while Xen de Ruwe (SLO) doing double duties in the Rotax Project E20 eKart class ranked P3 ahead of the series leader Petr Bezel (CZE). The poleman was fast and took a convincing victory, repeating his successful run in Final 2. The top 5 order was the same in each of the Finals: the 2019 RMC Euro Trophy champion Jakub Bezel (CZE) was 2nd taking valuable points, then Mika Metz (GER), 2020 champion Xander Przybylak (BEL) and de Ruwe 5th. The 2021 title was partially decided by a collision between the two likely champions in the first race, resulting in Petr Bezel becoming the champion. He and his brother will take their place on the start grid in yet again in December at the RMCGF.

ROTAX DD2 MASTERS
In DD2 Masters, it was local driver Michael Becker (GER) that excelled to win the weekend with a 1st and 2nd place in the finals, finishing 3rd in the overall standings. Former DD2 German champion Denis Thum (CYP) took the chequered flag in the last race to be P2 on the podium ahead of the new DD2 Masters champ Paul Louveau (FRA) twice 3rd, who will be heading to Bahrain for the RMCGF 2021. Alessandro Glauser took 2nd in the initial Final, but was caught up in one of the race incidents in Final 2, unable to restart after the red flag, but with sufficient points to secure the vice champion’s title.

All the racing action and the finals videos are on the Camp Company channel on YouTube – https://www.youtube.com/channel/UCooddsZW5ZnkBwULUHrihkA/live

Download the Rotax Global App from the App Store or Play Store to have complete access to all of the direct online links, entry list, track info, results and series details on your mobile phone or device