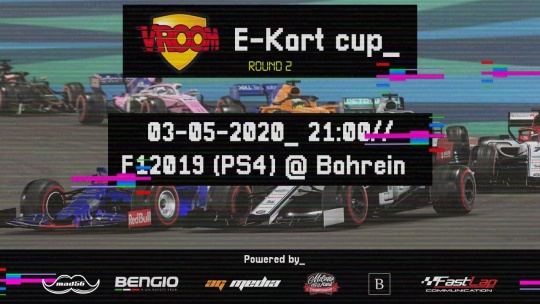 Author: Vroomkart International
After the first round, we're back on track for a new virtual race!
After the great success of the first race staged a few weeks ago, again and hopefully for only a short while, in the absence of real races, we're again donning on our suits and helmets for a new virtual challenge. The spirit of the competition is now known to everybody: having fun and entertaining those who want to follow us. The same "mantra" that guided us in the first round staged on the Spielberg track (Red Bull Ring) and easily won by Gabriele Minì.

For this new race, we have chosen the same modes, that is, the Play Station 4 as the reference platform and the F1 2019 game; the track: Bahrain for a night-time event. After 15 minutes of qualifying, the race will start immediately after with a duration of 25% compared to the actual laps. We will again be assisted by the folks of Milano Kart Championship for the streaming broadcast (we will communicate the link shortly); also confirmed, the commentary duo, Edoardo Vercellesi (Sky Sport) and Andrea Giustini (Vroom Kart).

Many thanks to Bengio HST and Mad56, event partners. The prizes to be won for the first driver will be:
- Pole Position
helmet cleaning kit + MAD56 t-shirt
- Victory
KartPants + BENGIOhst T-shirt
- Best comeback
Subscription to Vroom Mag

Below, the driver line-up competing on Sunday evening: