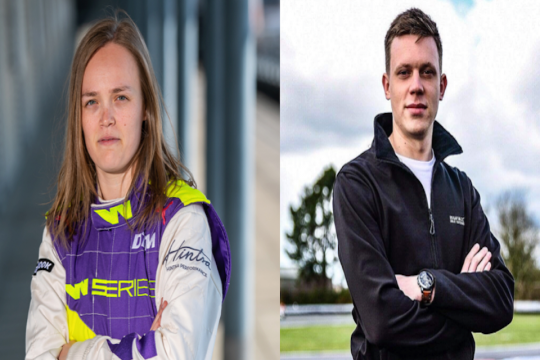 Author: Vroomkart International
The 2020 Rotax MAX Euro Trophy season sees a few changes ahead of the forthcoming Winter Cup at Campillos in late February.
A new line-up will be a big change for the Rotax MAX Euro Trophy season opener, which starts at Circuito Karting Campillos in just four weeks’ time, as firstly, two new members of the livestream team jump on board of what promises to be a great year ahead.
Official commentator Alex Goldschmidt will be joined at Campillos by experienced racer Sarah Moore, who who will be heading into a second successive season in W Series, racing alongside the DTM and Formula 1 in their sophomore campaign.
The Racing Pride driver ambassador has also raced with Rotax power in her career, having competed in the Stars of Tomorrow" national championship in 2007 and 2008 in Mini MAX.
She has also won the 2009 Ginetta Junior Championship, along with the 2018 Britcar Endurance Championship in 2018 alongside Matt Greenwood in the Tockwith Motorsport Ginetta G50 GT4.

From the Easter bank Holiday weekend on April 10th, Anthony Jordan, based out of Silverstone, will now be working alongside Alex as the newly-appointed pit lane reporter for the full four-round calendar, which commences at Karting Genk, the “Home of Champions,” for the third successive year.
Along with this, there is a revised timetable for the Winter Cup, due to event organisers and promoters Camp Company GmbH extending the grids for Seniors to a maximum of 90 entries capped, along with DD2 and DD2 Masters running separately around the 1,580-metre circuit, as Qualifying Practice gets underway on February 21st at 1630 CET.

Coverage of the 2020 Rotax MAX Challenge Winter Cup gets underway LIVE and DIRECT from Circuito Karting Campillos, courtesy of championship promoters Camp Company GmbH, who will be providing a livestream all weekend, with Downforce Radio providing a dedicated audio stream live throughout the season, only on Rotax Radio.