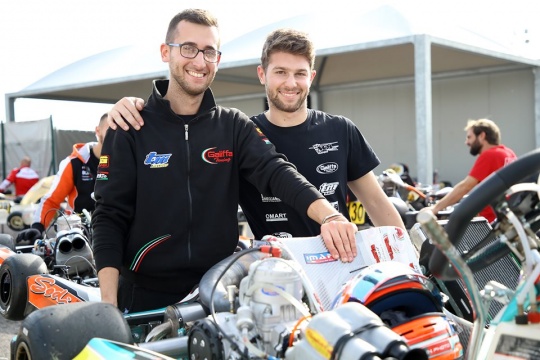 Author: Vroomkart International
The FIA events archived, all international karting is back on track for the last part of the season. On the Brescia track, the WSK Open Cup comes to life with official qualifications.
As usual on Friday, the stopwatch provides the first verdicts for all four categories.

60 Mini - Tsolov in front of everyone
Numerous and fierce as ever, the 60 Mini opens the WSK Friday with six pole positions in the group. First absolute time in the hands of the Hungarian Nikola Tsolov (Team Driver) with 53.880, valid for the primacy of group A. Behind him the Polish Jan Przyrowsky (AV Racing), in front of everyone for the group B, third virtual place for Kiano Blum (Team Driver), record holder in group C. Last three pole positions assigned to Adam Hideg (Baby Race), Rashid Al Dhaheri (Parolin) and Enzo Tarnvanichkul (Baby Race), respectively for groups D, E and F. Many the names of the new Mini, already engaged in the first three heats won by Tsolov, Blum and Al Dhaheri.


OKJ - Antonelli starts well
Unlike the 60 Mini, the Junior starts with the usual names, with Andrea Kimi Antonelli (Rosberg Academy), pole man of the day with a 48.324. Good first run for the new driver of Sauber Karting Team, Christian Ho with the best time in group B, third absolute time for the Russian Artem Severiukhin (Ward Racing). Closing are the neo-KR drivers, Arvid Lindblad and Martinius Stenshorne, ahead in groups D and E. Severiukhin and Bedrin triumph in the first two rounds of the day.

OK - Smal displaces the officials
Kirill Smal (Ward Racing) snatches Senior Friday's titles with the best time in 47.249, useful for starting from the first box for group A. Joseph Turney (Tony Kart Official) is back with the second fastest time in front of Kajus Siksnelis (Ward Racing), now on the rise after winning the Academy Trophy. Behind the poleman of groups B and C, last pole position for Cenyu Han (Rosberg Academy). Second and third position for the new (or almost) drivers of Tony Kart, Pedro Hiltbrand and Lorenzo Travisanutto both in group D. Ward Racing closes with a bang on Friday with Smal and Degnbol in front of everyone in today's double heats.

KZ2 - Giacomo Pollini leader in the premier class
After the KZ World Championship last month, the KZ2 protagonists are back on track. After having won the title of Italian Prototypes Champion, Giacomo Pollini (NGM Motorsport) starts again from the absolute pole position in 46.743. The NGM Motorsport driver left no room for competition from Giuseppe Palomba (Birel Art), fast in the new red and white colors, third place for Tom Leuillet (Prag Racing Team). Top five for the returning Alessio Lorandi (Baby Race), fifth place in the hands of Leonardo Marseglia (Birel Art). Sixth Stan Pex ahead of Piccini (Tony Kart) and the excellent Bizzotto (NGM Motorsport), closing the top ten places are Luyet (D.E.L) and Dalè (Nuova 3M). Victory in going through the field for Palomba in the only run disputed in the day.

Appointment tomorrow with the full program of direct matches in the pre-finals and finals on Sunday 27 October.